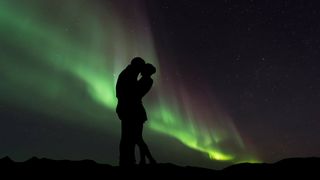 The Northern Lights – also called the aurora borealis – are a hypnotic sight. They twist, they ripple, they break and remake. They've been described as like pillows, curtains and ribbons, and they can explode with colour, then settle down into gentle waves lapping the night sky.

Perhaps because they demand so much in terms of both travel and perseverance (the longer you're in a destination, the better), the Northern Lights are a legendary subject for landscape and nightscape photographers. However, if you're going to put them on your bucket list, you need to know when, where, and how to see and photograph the Northern Lights successfully.

What are the Northern Lights?

Few people understand the Northern Lights. You may well know they are caused by the solar wind coming from the Sun. You may also know that the light is caused by electrically charged particles – electrons – ejected from the Sun, which interact with the Earth's magnetic field.

What you see depends on the position of the 'auroral oval', which in turn depends on the intensity of the solar wind and the direction of its magnetic field. You can find out where the auroral oval is by visiting the Space Weather Prediction Centre.

Your view will also depend on where you are standing. For instance, if you are quite some way from the display, it will appear as an arc of green often known as a 'forest fire' (pictured below). When it's closer, you'll see a dynamic display, such as rippling green curtains, called 'drapery' aurora. If you're immediately underneath the display, it will all happen above your head, and you may see a 'corona' aurora.

The last of the three is the most rewarding as you'll see a lot of movement and pulsing as ultra-bright aurora fill the skies, but it's very tricky to photograph. The good news is that the 'forest fire' type of display – which is the most common – is great for landscape photography even if it's not very bright. However they appear, the Northern Lights are always otherworldly, and easily worth the hours of travel, days of waiting for clear skies, and more hours of standing outside in the cold.

How to find the Northern Lights

Finding clear, dark skies is much easier if you're happy to rent a car and drive around in the often snowy, icy conditions of the far north's winter. Another option is to book onto a specialised Northern Lights photography tour, whether that be a multi-day package including flights and accommodation, or an evening tour that picks you up in a city and takes you out to the wilderness. With this option you'll often also receive some instruction on how to photograph the aurora borealis.

The best places to see the Northern Lights

The truth is, the Northern Lights can be seen between late August and early April anywhere high up in the northern hemisphere. Although they can occur as low down as the UK and northern Europe, and can occasionally be glimpsed along the US-Canada border, the Northern Lights most frequently occur between 64° and 70° North latitudes. That's roughly the location of the Arctic Circle.

That Arctic Circle sits across Alaska, northern Russia, Iceland, and Lapland (which covers northern Norway, northern Sweden and northern Finland). Another good place to go is the Faroe Islands, an archipelago of 18 islands between northern Scotland and Iceland. For the intrepid, a trip to Antarctica in March can yield views of the Southern Lights, an identical but little-known sister of the Northern Lights. This destination gets ignored largely because it's so cold down there, expensive to get to, and mostly inaccessible.

Arguments about where the best places will always rage, but the Faroe Islands and Iceland do have one big advantage, and that's temperature. Since the North Atlantic jet stream brings up warm air from the Caribbean, these two locations are a lot warmer than northern Scandinavia and Lapland, Alaska and northern Canada. It's perhaps for that reason that Iceland is often said to be the best place to see the Northern Lights, if only because it's much easier to stand outside in 0°C than at -20°C below freezing, which is common everywhere else near the Arctic Circle.

When's the best time to see the Northern Lights?

Why are the Northern Lights stronger around the equinoxes?

A great time to go hunting for the Northern Lights is equinox, either the autumn equinox (which next occurs on 23 September 2019) or the spring equinox (which next occurs on 20 March 2019). Equinox means 'equal night' – when there are 12 hours of daylight and 12 hours of darkness. Naturally, this means the Northern Lights viewing season can really kick off, but there's another reason to go hunting for aurora around the equinox. The equinox marks the point when the Sun crosses the celestial equator, and it happens because Earth orbits the Sun, but also because Earth rotates on a tilted axis that's perpendicular to the Sun during the equinox.

According to Dr Melanie Windridge in her excellent science-travel book Aurora: In Search of the Northern Lights, the solar wind has a magnetic field of its own that faces southward relative to the Earth during the equinox. Put simply, the connection between our planet and the solar wind is never stronger than during the equinoxes, and incredible displays are often experienced at this time of year.

How to increase your chances of seeing the Northern Lights

However, that doesn't mean you can't go on a Northern Lights hunt during the winter between the equinoxes. If you really want to maximise the darkness, go for winter solstice on 21 December 2018 when the Arctic Circle region experiences almost 24 hours of darkness.

That theoretically gives you a lot more time to look for Northern Lights – you may even see them at lunchtime – though a better time to go is in November or January when dusk is in the afternoon, and lasts until after breakfast. It's a great period for photography because sunrise and sunset are stretched out over a couple of hours, and you can go out photographing the Northern Lights before dinner.

What camera equipment do you need?

Unfortunately, most people who go hunting for the Northern Lights don't think about camera equipment, and often turn up only with a smartphone or a point-and-shoot camera. These gadgets aren't sensitive enough to capture the Northern Lights (and nor do they have enough manual controls), and what's more, their batteries often stop working in the cold temperatures. So here's what you need to photograph the Northern Lights...

Manual camera and wide-angle lens
Any DSLR camera can be used to photograph the Northern Lights. Entry-level cameras such as the Canon 800D and Nikon D5600 will do the job, as well more advanced full-frame DSLRs like the Canon 6D MkII and Nikon D850. Either way, you will also need a wide-angle lens, such as a 10-22mm. Mirrorless cameras can also be used, as long as they have full-frame sensors, such as the Sony A7 III.

Tall and solid tripod
When travelling, it's tempting to take a small tripod. That makes sense for keeping luggage to a minimum, but it's not very useful when shooting the Northern Lights. Since you'll be taught tilting your camera upwards towards the sky, and possibly straight above your head, the taller your tripod, the better.

8 tips for photographing the northern lights

Once you've gathered all your gear, it's time to get snapping. Here are my top tips for how to photograph the Northern Lights effectively.

01. Have use of a car
Having wheels dramatically increases your chances not only of finding clear skies, and therefore the Northern Lights, but also of getting to iconic locations to improve your composition. It also helps you get away from any light pollution around your hotel. However, you need to be confident of driving in snow and ice (and you'll probably want a 4x4 vehicle with studded tyres).

02. Shoot in RAW format
Your images will need to be processed afterwards to tease out the brightness and colour of the Northern Lights, so shoot in the RAW format. That way, your finished images will have a lot less noise.

03. Turn down your LCD's brightness
When shooting at night, the LCD on the back of your camera can be incredibly bright and distracting. Take it right down to its lowest brightness setting and you will still be able to use it without suffering from glare.

04. Scout the location in daylight
Once you're settled into your hotel, take a drive around the local area and scout out a couple of locations that you could return to later. Not only will this increase your chances of finding an interesting composition, but you will know exactly where to park your car, and where you can walk safely in the dark.

06. Remove all filters
Whatever lens you are using, make sure you remove any filters. These will only decrease the amount of light coming into the camera.

07. Get your settings right
Switch your camera to manual mode. First, put your lens into manual mode and move the focus ring to infinity. You're going to need to let as much light as possible in, so go for a low f-number (such as f4 or f2.8), set the ISO to around 1600, and if you see any hint of green in the night sky, open the shutter for about 20 seconds. If you see significant activity, with moving green curtains or similar, try raising their ISO, perhaps to 3200, and opening the shutter for just five or 10 seconds, depending on their brightness. You will soon find that different intensities of displays require different settings.

08. Always take spare batteries
Sub-zero temperatures are not only bad for your fingers, but can sap your camera's batteries. They run down much faster in the cold, so take a couple of extra batteries, and keep them in jacket pockets, and close to your body, to keep them warm. Ditto your phone, which will otherwise stop working.