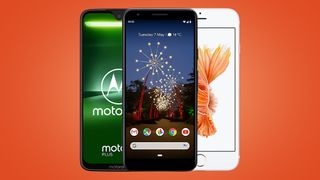 If you're looking for the best budget camera phones, you're in the right place. Investing in a top phone can be an expensive affair, especially with the rising prices of smartphones these days. But for those on a budget, this isn't a time to despair. As technology has improved so have budget camera phones, giving way to some stellar cameras at surprisingly low price points.

And when we say budget, we really mean it. This isn't a guide full of devices like the iPhone 11 or Samsung Galaxy S10, with some shoddy defences about how they're 'affordable for what you're getting'. In this list you will only find truly budget camera phones. And for those with endless budgets, our round-up of the absolute best camera phones will be more for you.

If you're a creative needing a camera phone for work that won't break the bank, you'll be happy to hear the market is varied. The likes of Google, Samsung and Apple are all still available at even the lowest budgets. If you're able to wait a few weeks, you could even bag a bargain-priced iPhone as all the best Apple Black Friday deals start to surface.

While you might not be getting market leading specs in the best budget camera phones, features such as 4K video, dual camera set-ups, image stabilisation and even portrait modes can easily be found with budget camera phones. And because we wouldn't want to leave anyone out in this list, we've kept our definition of budget varied. With everything from a sub-$100/£100 phone through to some slightly pricier, spec heavy 2019 phones, you have plenty of choices.

Below you can find our full run down of the best budget camera phones for 2019, so whether you're a film maker on a budget, a photographer on the go or someone who just wants to take stunning snaps without leaving a huge dent in your finances, this is the place to find your next phone.

The best budget camera phones you can buy

Reams of power at a budget price

Combining affordability with top notch camera ability, the Motorola Moto G7 Plus easily tops this list. For any creatives on a budget, this handset allows you to get a cheap phone while still getting all of the features you would expect from a more expensive phone. Fast charging, a hefty 3200mAh battery and a dual camera set-up.

It comes with a primary 16MP camera boasting an f/1.7 lens, optical image stabilization and a host of shooting capabilities. And despite its price tag, the Moto G7 Plus manages to perform in both light and dark situations.

And for those who use their phones to produce videos, the Moto G7 Plus can shoot 4K video, a rare feature at this price point. You can even make use of portrait mode with the secondary lens for easy high-end portrait shots.

Considering the Google Pixel 3 has consistently been regarded as one of the best camera phones on the market, the Pixel 3a is an excellent choice for creatives on a budget. The camera itself is the same megapixels as the Pixel 3, the only real differences are internal.

The Google Pixel 3a lacks some of the smarter features its bigger brother has meaning images will load slightly slower and might not be quite as clear. However, with a bigger battery than the Pixel 3, this feels like a better choice at a cheaper price.

The only thing stopping this device taking the place of best budget camera phone is its price tag, looming a few hundred dollars over the Motorla Moto G7 Plus.

Super cheap after the release of the S10

When Samsung releases new phones, the old flagship models don't get forgotten about - they just become fantastic affordable phones. That's exactly what has happened to 2017's  Samsung Galaxy S8. First and foremost, the consistency of the quick automatic main camera never ceases to be impressive. Point and click was never so easy. But above and beyond the normal, Samsung brought in a remarkable host of features and settings to the S8, including a brilliant selfie mode. And, not to be underestimated, the Galaxy S8 is the ideal shape and size in the hand to use for photography.

It might have been superseded by both the S9 and S10 range, but at its current price you really can't go wrong.

Considering how little you have to pay for the Wileyfox Swift 2 Plus, it's scarcely believable how good the main camera on it is. The troubled Wileyfox brand may not be a household name, but this handset gives you a 16MP camera and a 3L8 sensor courtesy of a manufacturer that you just might have heard of - Samsung. That means that you can forget the grainy, washed out snaps that you may expect from a phone of this price and look forward to rich colours and fine detail. Even the autofocus holds its own. Of course it isn't jam-packed with features and it's a bokeh-free zone. But...well did you see the price?

Look around the web and you'll see the  Moto G6 crop up again and again at the top of best budget smartphone lists. It is essentially a cheaper (and not quite as powerful) version of the Moto above.

Combining excellent quality across the board (display, battery, design), it's easy to see why. And the cameras are a big contributory factor, too. It starts things off with a dual main camera set-up on the rear. The 12MP and 5MP sensors team up to enable the auto mode to take consistently attractive snaps.

The portrait mode is surprisingly effective and even the 8MP selfie snapper on the front isn't bad. So while we just about prefer the main camera on the Wileyfox, the Moto G6 is the one to go for if you have a bit of extra cash and want a better phone on the whole.

Best iPhone camera on a budget

Yes, you can buy an iPhone on a budget. It's true. You just have to look back through the annuls of their releases to find one cheap enough. The iPhone 6S was one of the very best cameras on the market when it hit the shelves in 2015, and that included the camera. It introduced Live Photo, made more of the then-innovative 3D Touch and raised the megapixel count on the main snapper to 12MP - resulting in the most detailed images any iPhone had captured at the time.

Want to save some more pennies? Then the iPhone 6 camera isn't that much worse, although the megapixel count goes down.

Loads of megapixels for your money

Sony has a notable dynasty in photography and so it's no surprise to see it coming up with the goods on the wallet-friendly Sony Xperia XA1. On specs alone, the rear camera has a similar look to dedicated standalone compact cameras with a 23MP sensor of 1/2.3-inch size. On a day-to-day basis that means generally fabulous looking photos. It even succeeds in darker climes, with Sony's brightening smarts achieving excellent quality. Things start getting a bit rough around the edges on extreme close ups, but this is a cracker of a snapper for the price.

For when money's really tight

Honor is increasingly staking a claim as the posterboy for how to build smartphones on a budget. The Honor 9 Lite was a fine example of this and although it is a few behind in Honor's long line of phones, we're still big fans of it.

Mobiles don't come much more affordable and yet you still get dual rear-facing cameras and dual front-facing cameras packed into a design that's based on the former flagship Honor 9.

So if you just need a device that's going to deliver passable photos in good conditions (don't expect too much in low-light), then you can't get much more affordable than the 9 Lite. If you're after something more recent, then the followup, the Honor 10 Lite, sits at the top of this list of the best budget camera phones.

The camera in Sony's XZ Premium had already won us over, and then they went and put it in its 2017 flagship Xperia XZ1. So that means super defined 4K video shooting from what we can now call a budget handset - practically unheard of. There may not be the same resolution in the 5.2-inch display, but you can still enjoy most of the splendour of your footage in HDR-supported quality. And 4K isn't the only trick up the XZ1's sleeve, as we also really admire the super slow-mo smarts that captures 960fps. You really can achieve a lot with this Sony smartphone.

2018 was such a break out year for Huawei that we know that it's now a name well set in the public consciousness. And it wasn't just at the very top end of the market that it impressed, with the Huawei Mate 20 Lite showing what can be achieved with a $300/£300 phone.

With a 6.3-inch screen, it's larger than most of the other smartphones on this list (you've entered phablet territory, really). And check out the specs of the cameras - there's a reliable 20MP and 2MP set-up on the rear for photos that pop with color, and 24MP and 2MP on the front for excellent selfies that even let you achieve that sought after bokeh effect.