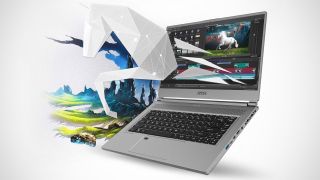 For most creative jobs these days there's really no need to be tethered to a heavyweight desktop computer. Whatever your design discipline, there's no problem with doing your thing on a laptop, and you gain the advantage of being able to work wherever you want.

Whether you're wrangling 4K video or working with the best 3D modelling software, a well-specced laptop will serve you well, and we've unearthed a deal on a powerful MSI machine that you won't want to miss. The MSI P65 Creator-1084 is now $100 off at Amazon, and you and get three free months of Creative Cloud thrown in as well – just enter the code 100CREATOR at checkout.

The MSI P65 Creator-1084 is an absolute monster that's easily capable of handling just about any creative task you can throw at it. Built with photo editors, 3D modelers, video editors, photographers and other creative professionals in mind, it packs the sort of specs you'd happily accept from a desktop PC and crams them into an ultra-light, ultra-thin laptop form factor.

From a creative point of view, image quality is what matters, and the P65 Creator delivers with a 15.6-inch IPS-level 4K display that's calibrated with MSI True Color technology to provide close to 100 per cent colour gamut. There's more to its visual prowess than the display, to; driving the visuals there's an NVIDIA GeForce RTX 2060 GPU which will make video editing and 3D modelling a breeze, and won't bat an eyelid at even the most enormous, layer-heavy Photoshop and Illustrator files. And if you need to get a closer eye on those fine details you can simply plug the P65 Creator into a full-size 4K display to get the bigger picture.

Alongside the powerful GPU, the P65 Creator also draws its power from a hefty Intel Core i7 processor coupled with a whopping 32GB of DDR4 memory, so even if you're running every Creative Cloud app simultaneously, not to mention a stack of Chrome tabs and Slack channels, this laptop will cope with it all just fine. Finishing off the top-line specs is a terabyte of SSD storage, giving you plenty of space for all your important files and enabling the P65 Creator to start up in a matter of seconds.

Despite all that power, the P65 Creator's incredibly portable. It features an ultra-light, ultra-thin chassis that means it weighs in at a mere 4.2 lbs and is just 0.7 inches thick, so it's perfect for putting in your bag and taking anywhere. And if you're creating on the move it won't let you down at a critical juncture; its battery will give you up to eight hours' use on a single charge.

The MSI P65 Creator-1084 will normally set you back $1,882.13 at Amazon, but right now you can save $100 and get three free months of Creative Cloud thrown in as well. To take advantage of this fantastic deal, simply head this way and enter the promo code 100CREATOR at the checkout and you're good to go; the offer's running until 28 February, so don't hang about.

Not in the US? See more top deals on laptops below.