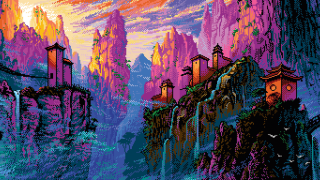 Nostalgia hits people in waves every few decades. When these waves break, we tend to see what we grew up with recycled by the media and sold back to us. In the case of pixel art however, a community of creators are producing images in the medium that go beyond mainstream acceptance.

Given that pixel art has strong connections to video games, a medium itself which hasn’t been fully embraced as art yet, perhaps it’s a natural fit for people with that independent, artistic sensibility.

“Of course pixel art stems primarily from games,” says graphic artist Richard Schmidbauer, who was first blown away by the pixel-based graphics in Blizzard’s Blackthorne for the Commodore 64.

“But it’s really bled into other forms of art in the past few years. You tend to see it in videos, clothing and pop culture. It’s become so popular because a lot of people who grew up with those games are now creating various things. So most people today are used to seeing pixel art as a medium of expression.”

Pixel artist and game designer Raymond Schlitter, AKA Slynyrd, has a deep-seated affinity to the aesthetic, having grown up in the 80s and 90s. “I instantly felt at home with pixels,” he says. “Part of it is fuelled by nostalgia, but I can also justify my passion objectively. Pixel art offers the control I demand, while its restrictions help funnel my rampant creativity to capture my visions efficiently.”

For Matej Jan, a pixel artist who also edits Retronator, a blog dedicated to the medium, the restrictions of pixel art makes it as distinct an art form as oil paintings or watercolours. “Pixel art is art first, pixels second,” he says. “There’s a layer of knowledge specific to pixel art, but you can see the artistic fundamentals at work underneath. If the foundation isn’t there, no amount of polish can save you.”

“The main constraints of pixel art would be the limitations in resolution and palette,” says Richard. “You really have to work in a more impressionistic way. You have to try to describe a shape with the limited blocky space and colours, and still have it read well.

“However, the main constraints of the medium are also its biggest strength. You have to work within this frame, but you won’t have to worry so much about other things. You can’t add large amounts of detail and lose yourself in that because there’s just not enough space. It leaves you more time to focus on the important parts, like composition. I find it liberating.”

For pixel artist Jubilee, the creation process is very soothing, “I started doing pixel art as a hobby and found it calming to tap each little pixel into the image until you start to see something other then just little squares,” she says. “I don’t think there’s any other medium that can give you such readable concise imagery on such a small scale.”

As Matej points out, it’s this lack of photorealism that adds artistic expression to pixel pictures. “Pixel art is a stylisation,” he says. “When I look at [background pixel artist] Waneella’s depictions of Japan, there’s little factor of nostalgia. It’s the same awe as I have for Ghost in the Shell’s animated Hong Kong, or Into the Spider-Verse’s 3D, post-processed New York City.”

For artists looking to take their first steps into the field of pixel art, the good news is that it’s a very accessible and budget-friendly medium to pick up. “Pixel art can be created using virtually any graphics software,” says Raymond. “This makes the price of entry almost nothing.”

Readily available online resources, including Raymond’s Pixelcasts on his Slynyrd YouTube channel, help to demystify the process. “While making pixel art can be difficult to master, a beginner can learn to make serviceable art through self-guided observations,” says the artist.

Thanks to its low data costs and small file sizes, pixel art is also easy to share online. “The low-spec parameters make it one of the most practical digital mediums,” Raymond adds. “Once you develop some proficiency you can generate graphics very rapidly. The inherent uniformity of the pixel units enables you to easily recycle elements and use repetition to great effect. It’s almost like you’re building an image rather than illustrating.”

If you do feel like paying for actual pixel software, Richard estimates that you’re only looking at forking out around $40. “But even Photoshop works for pixel art,” he says.

“And before you get into building your own palettes, don’t hesitate to try out famous and freely available palettes, such as Dawn Bringer 32. They are very good and fun to work with. It’s one less step to worry about,” advises Richard.

Learn from the community

The growth of the pixel art community means there are also plenty of creators to learn from. Take Matej’s Retronator blog, which started life as his personal art Tumblr back in 2010.

Today he estimates that it attracts 30,000 readers who are keen to see what’s going on in the pixel art scene. “And that’s still small compared to some individual pixel artists, who have 100,000 followers and more,” he says. “There are a lot of people who love pixel art.”

This increased popularity of pixel art has also benefited the image of the medium, which in the past has sometimes been hamstrung by its connection to games. “With so many talented artists using the medium to make non-game-related art these days, pixel art seems to be turning some new heads,” says Raymond.

“While most of my commission requests come from game-related projects, an increasing number come from unexpected places. I’ve done work for hip-hop, soul and rock musicians. I’ve even been approached by people in the fitness industry.”

Jubilee agrees that it’s an exciting time for the medium. “Each day, more and more artists are pushing the boundaries of what pixel art is, and it’s awesome! I hope it becomes even more popular, because it’s been nothing but positive for me.”

This article was originally published in issue 173 of ImagineFX, the world's best-selling magazine for digital artists. Buy issue 173 or subscribe to ImagineFX.