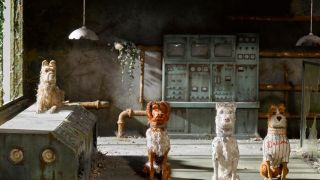 Whatever happened to our love for man’s best friend? It’s a question posed by a dissenter in Wes Anderson’s latest film, Isle of Dogs, which tells of a struggle between people and canines. In the stop-motion film, dogs are exiled to a vast garbage-dump island – but if the exhibition for Isle of Dogs is anything to go by, the love for our four-legged friends is as strong as ever.

Located in The Store X on The Strand in London, the Isle of Dogs exhibition saw fans of the film queuing up in droves to get a closer look at the film’s leads. The animation – which was shot over 445 days at East London’s 3 Mills Studios, with a crew of more than 670 people – features over 240 sets and 1,097 puppets. An extensive amount of work went into creating the 144,000 still frames that make up the 100-minute film.

A taste of this craftsmanship can be seen in the exhibition, which feels right at home in The Store X’s gallery space. Models and sets are showcased in the open, giving attendees a rare chance to see details from the film up close and personal.

All that separates you and the stars of the film are white lines painted on the floor, which ties in nicely to the totalitarian tone of the film. Here are some of our favourite bits from the exhibition.

It’s hard to get a grasp of how large the characters and sets are when you’re watching an animated film. After all, cinemagoers have become used to post-production ramping up the wow-factor of what we watch.

However, we were stunned by the size of the sets and characters on display here. From the towering Megasaki Municipal Dome to the city’s temple, the scale of these models goes beyond what we expected and gives visitors an incredible appreciation of the handiwork that went into making them.

02. Stunning insight into the animation process

As well as defying our expectations in terms of size, the setup of the models gave us a deeper understanding of how the film was made. For example, one sequence in the Isle of Dogs sees a tracking shot pan through a laboratory as scientists work on a cure for the canine population.

Viewers would be forgiven for expecting this sequence to be stitched together from various shots and sets, but at the exhibition you can see that the laboratory was constructed in such a way that cameras could easily shoot across it.

The use of electrical lighting for street lights and the bauble in Atari’s headset also surprised us. Given that the film is a stop-motion animation, we weren’t sure if lighting would interfere with the shooting process, so it’s fascinating to see how these elements can all work together.

03. Time to catch references we missed

Isle of Dogs is absolutely packed with references to Japanese art and culture. Some of these, like the use of famous paintings including The Great Wave off Kanagawa, are immediately obvious. However some of the more subtle nods to the country might have passed you by as the film plays out.

The exhibition offers a great chance to mull over the subtler details and let some of the more artistic allusions sneak up on you. Take the model of Atari’s crashed plane, for example.

This stunning set piece was permanently surrounded by admirers snapping on their smartphones when we visited, but it’s only when you take a second to step back that a similarity to a certain flag starts to emerge...

It’s a sad truth that a lot of hard art and graphic design work goes unseen by the time a film is released. While some details are lost in the edit, others are only viewed on the screen for a few seconds. Getting the chance to see these models in person lets viewers explore the characters and sets on their own terms and uncover hidden gems.

These include the beautiful paintings on the walls of Mayor Kobayashi’s bath-house, and the intricate statues and scriptures found on the Megasaki temple. Imagery of cats in the temple is more obvious when you get more time to study the set, which helps reinforce some of the subtle themes that Wes Anderson has weaved into the film. (Are felines behind all this hostility to dogs?)

When you walk into the Isle of Dogs exhibition, you’re immediately transported into the Megasaki noodle bar set from the film, complete with propaganda blaring from a television that loops with animation from the movie.

In a clever bit of curation, the model of the noodle bar set is situated in the corner of the real-life eatery it inspired. Once you’ve finished taking a picture of the set you turn around and find that you’re inside the world of the film. It’s a nice touch that helps immerse you into the world of the Isle of Dogs before you head into the exhibition proper.

If this has whetted your appetite for the exhibition, you’re in luck. The Store X has extended its run from 5 April through to 8 April, so you’ve still got time to visit.

Isle of Dogs is in cinemas now.