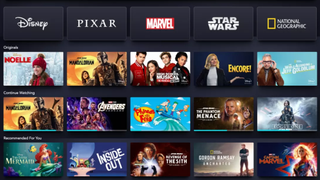 Disney Plus (or Disney+) now has over 54 million subscribers worldwide, and seeing that it had roughly 21 million in February this year, it's safe to say that the House of Mouse is enjoying a massive surge.

And its popularity shows no signs of slowing down. For the uninitiated, Disney Plus is basically Netflix for Disney-owned content, and that's not just cartoons for kids, there's a huge amount of TV shows and films available. More and more content is being added, too. It's recently been announced that The Right Stuff series is going to debut on Disney Plus, for example, after originally having been developed for Nat Geo. And Star Wars: The Rise of Skywalker was also released early onto the platform in time for Star Wars Day (May the 4th).

Where is Disney Plus available? You can get it in the US, Canada, India, the Netherlands, Australia and New Zealand and some European countries such as the UK, Ireland, Italy, Spain, Austria, Switzerland and Germany. If you're in any of those countries you can decide whether the streaming service is for you by getting a free seven day trial before you commit to spending any money at all.

When you consider what's on offer, it's not hard to see why so many have gone for Disney Plus. The on-demand service is incredibly good value, and hosts over 500 movies and 7,500 TV episodes. This includes all the classic Disney films, as well as content from Disney's Marvel, National Geographic, Pixar and Star Wars brands. You can also watch every single episode of The Simpsons (lockdown plan, anyone?). And more and more hit films and original content are being added each month.

You'll find all the latest information on pricing, how to get a free trial, key releases, compatible devices and more in this guide. And if you want to make sure you're getting the best experience watching your favourite TV and movies, make sure you've got one of one of best monitors or most powerful laptops available.

How to get a Disney Plus free trial

Get a FREE Disney+ trial: Try Disney Plus for free for 7 days
Want to try before you buy? You can explore the Disney+ catalogue for free for a week. After that, it'll cost $6.99 / £5.99 per month. Or you can save on the monthly cost by getting a yearly subscription for $69.99 / £59.99 a year, which basically means you get two months for free.

If you decide Disney Plus isn't right for you, you can simply cancel your Disney Plus free trial like so:

When it comes to content, this streaming service's library is impressive – it feels like it would almost be easier to list what Disney Plus doesn't include. First and foremost, users can access all the classic Disney movies and shows, which in itself offers hundreds of hours of entertainment.

But it doesn't stop there – on Disney Plus you'll also find blockbuster movies and TV shows from brands such as Marvel, Star Wars, National Geographic and Pixar. And then there's The Simpsons (every single season). More hit shows are also set to hit Disney Plus throughout 2020. You can also download all of the content on Disney Plus, making it easier to watch wherever you are (however dodgy the WiFi).

There are plenty of movies already available on Disney Plus, and lots coming up throughout the year. The original broadway recording of Hamilton will arrive on July 3, and that's instead of it opening in cinemas in 2021. Another big release that was initially meant for cinematic release, but instead is getting a Disney+ debut, is the Kenneth Branagh-directed movie Artemis Fowl. Based on Eoin Colfer's popular book series, you'll be able to stream that on June 12.

And of course there's the long awaited Frozen 2, which is coming to Disney+ on July 17. Fingers crossed that we'll also be seeing both Onward in the UK (currently only out in the US) and Maleficent: Mistress of Evil coming soon too.

In the meantime, here are just a few of the Disney Plus shows and films we're most excited about, which are all available to stream now.

Disney Plus: Upcoming shows and movies

We have to say, the volume and quality of content available here is a pretty mind-boggling. And its frankly unbelievably low cost makes it really excellent value for money. If by some miracle you do manage to find a hit film or TV show that isn't listed on Disney Plus, you can bet it won't be long until it is. Be sure to keep an eye on the official Disney Plus Twitter feed for details of any new releases.

Just download the Disney Plus app to watch it on the following:

Is Disney Plus worth it?

We're sure all the information so far has answered this question already. But just to be clear, the answer is, unequivocally, yes. Disney Plus and all its delights will set you back a measly $6.99 / £5.99 per month. That's the same price you pay for the lowest monthly Netflix fee in the UK. And, let's be honest, the non-HD stream to a single device service is nothing to shout about.

A bumper Disney Plus pack also available in the US for $12.99 gives users access to Hulu and ESPN Plus streaming services too.