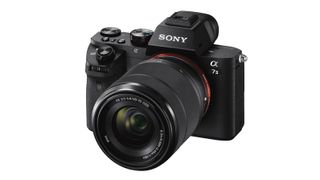 We've seen some amazing Cyber Monday deals already, but this discount on Sony's Alpha A7 II ranks up there as one of the best. Usually this full frame and mirrorless camera would set you back something in the region of $1,739.33, but with Amazon's amazing offer you can now grab it for less than $1k.

This means you can save a whopping $741.33 on a superb camera that has all the benefits of a full-frame sensor but without the bulk. Put simply, if you're a photographer on the look out for an affordable full-frame camera, this is the best deal we've seen this Black Friday so far. On top of being able to pick up an incredible camera with a 28-70mm lens, this deal also includes a free three-month complimentary Adobe Creative Cloud Photography Plan membership.

As is the case with Amazon discounts, this deal is open to everyone. However, if you want to get to the front of the queue, remember that if you are an Amazon Prime member you can access them 30 minutes before non-members. Be sure to sign up to a free 30-day Amazon Prime membership trial to take advantage of deals early, and don't forget that you can cancel your trial afterwards with no strings attached.

It's not often that you get to pick up a full-frame and mirrorless camera for less than $1k, but thanks to Cyber Monday that dream is now a reality. If you've always wanted to step up to this type of camera, there really has been no better time.

The Sony Alpha A7II is the first full-frame camera to offer 5-axis in-body image stabilisation, plus is can capture images with crisp 24.3MP resolution. And thanks to fast hybrid autofocus with phase-detection, you can capture images 30% faster than Sony's A7 model.

Speaking of which, while the A7 is a really impressive model that has also been marked down this Cyber Monday (see below), the Sony Alpha A7 II is a great upgrade that you don't want to miss - especially seeing as its price has now come down so much.

Sony Alpha A7 II Mirrorless Digital Camera: $998
Save: $741.33: There really is nothing like the Sony Alpha A7 II on the market. Lightweight, sleek, and intuitive to use, beginners and seasoned photographers are sure to enjoy this model.
View Deal

Shoppers in the UK don't need to feel left out, either. The Sony Alpha A7 has also had its price slashed by Amazon and can be yours for just £509. Delivering high image quality in a trim frame, this camera is a fantastic choice for photographers who are eager to up their game.