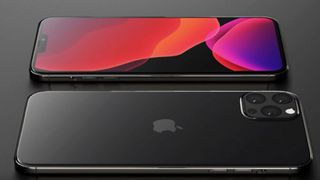 An Apple super-fan has created a concepts video to show what the iPhone 12 could look like, and the design harks back to earlier iPhones. This is in line with earlier comments from reliable Apple analyst Ming-Chi Kuo, who predicted that the 2020 model will have a "similar design to the iPhone 4". For those who can't or don't want to remember, the iPhone 4 was a sturdy looking phone with a distinctly square feel to it.

These imaginary iPhones – there's an iPhone 12, an iPhone 12 Pro, and an iPhone 12 Pro Max – actually look more like the iPhone 5 (which in turns resembles the 4). They feature rectangular edges instead of the usual more rounded corners, making their corners appear more in line with the latest iPad Pros (see our iPad Black Friday deals post to bag yourself one of those at a knockdown price).

You can watch all the predictions below, if you can stand the odd voiceover, which sounds like it's been done by a poor Siri relation.

The new iPhones are predicted to come in three sizes, 5.8-inch, 6.1-inch and 6.5-inch, making the 5.8-inch the smallest model since the 4.7-inch iPhone 8. There's also an edge-to-edge display to give maximum screen size, and there's no longer a notch to house the selfie camera. The back of the phone features a quadruple 12MP camera system (a triple camera was released with the iPhone 11) and a 3D sensor to aid depth perception within photos and videos.

Other predictions include the arrival of a new A14 chip and the inclusion of 5G support, plus an improved 6GB of RAM. All in all, it looks like the iPhone 12 could be a pretty desirable piece of kit (iPhones are fancy enough to warrant being called kit now, we think).

We won't know for sure if these predictions are correct until next September, when Apple usually releases its new models. And of course, we don't know any details on pricing at the moment (although we can't imagine the iPhone 12 will come cheap). For now, you can see all the best deals on the current iPhones via our dedicated price checker below.