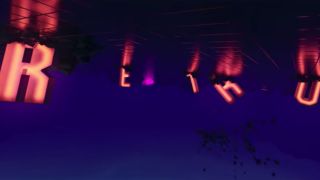 Muse are well-known for making a scene, just ask anyone who's ever been to see one of their dynamic live shows. And in similar grandstanding fashion, the rock band caught the attention of the internet yesterday as they announced the launch date and cover art for their upcoming album, Simulation Theory.

NEW ALBUM: Muse have announced that their new studio album, Simulation Theory, will be released on 9 November 2018. Pre-order through the band’s Official Shop for early access to tickets for the 2019 tour: https://t.co/VhxvLEijmwArtwork by Kyle Lambert // #SimulationTheory pic.twitter.com/5TuEV8sxlFAugust 30, 2018

If you put 'Muse' into the Twitter search bar, you'll get bombarded with memes, wild praise from fans, and snide remarks from people who can't believe what they're looking at.

So what's the fuss? Well, it can't have escaped your attention that design seems to be going through something of an '80s revival at the moment, and depending on your point of view, the cover for Simulation Theory is either a groovy continuation of this trend or an aesthetic abomination that would make even Kavinsky cry.

With its neon airbrushed visuals, vehicles that look like they've come straight out of Tron (ask your dad), and a retro font that a lot of people would more readily associate with '80s nostalgia trailblazer GTA Vice City, the Simulation Theory artwork is perhaps a bit too on the nose. It doesn't help that the word 'retro' is literally spelt out in the first video from the album, below.

Is all the online cynicism going a bit too far though? After all, the designer of the album cover, Kyle Lambert, has previously created posters for hit Netflix show Stranger Things, a series that has been praised for getting the '80s look just right.

We can't deny that Lambert has done a good job. If Muse hired him to create the pop cultural culmination of the decade with their faces on it, they definitely got what they asked for. But while the look and feel of the '80s was baked into the story of Stranger Things, here it feels as if Muse are belatedly jumping aboard the throwback bandwagon.

Perhaps it's the timing that has irked some fans. This announcement follows in the wake of Ready Player One – a film which relies on similar imagery and has a poster that bears a striking resemblance both in terms of aesthetics and composition – so perhaps we're all just going through design fad fatigue.

Or maybe it comes down to personal preference (and when you were born). Muse have always been a bit of a statement band, with previous album covers being as subtle as a sledgehammer (Drones, we're looking at you).

Fans of the band are going to continue lapping up what they puts out, while others are going to laugh this cover off with the 'How do you do, fellow kids' meme. Then there are those stuck in the middle, oscillating between adoration and weary resignation.

I'm sorry but I love this album cover. Muse is the Cool Ranch Doritos of music — it's bad for me but I can't stop shoving it into my head. pic.twitter.com/d4zVMl7ljXAugust 30, 2018