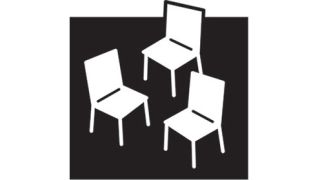 Next time you're out and about in New York and are looking for a spot to sit down and have a break, just look out for the chair logo (above).

This new logo is the winning entry of a competition created by The New York City department of city planning and the Municipal Art Society of New York. They invited people to design a new logo for the city's privately owned public spaces – known as POPS. The Big Apple has over 550 of these spaces, which make up 3.8 million square feet.

The new logo was created by graphic designer Emma Reed and was selected by a panel of seven experts, as well as a public vote  – where over 17,000 people voted. If you want to know more about the art of creating logos, then don't miss our guide to logo design.

"This image welcomes an individual or several people to sit down in a specified space. While the space is static and given dimension and a sense of weight by the use of the horizontal bar along the bottom, the arrangement of the chairs is freeform and open to the whimsy of its user," says Reed of her winning entry.

Reed's new design – named 'Have a seat' – feels both inviting and modern, and replaces a previous design of a tree, which was perhaps a little too generic.

The hope is that this new logo will help better signify the existence of POPS and lead to more people enjoying them. Reed's design is expected to roll out by 2021, so in the meantime, you may still have to look out for that tree.

Two other designs were also selected as 'Awardees', and there were two notable mentions, including a rather chilled out-looking Statue of Liberty taking a break. You can see all the entries on the POPS logo website.

Those inclined to read the small print will see that each Awardees won $2,000 for their designs, with Reed's winning entry awarded a further $2,000. We'll leave you to ponder whether or not that's a fair price for a logo that will be rolled out across one of the most visited cities in the world.