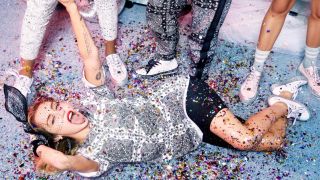 We're apparently living in the golden age of the collaboration. People are always trying to 'golden-age' stuff – TV, comics, capitalism – but, with this, they really might have a point. Collabs are nothing new. The first TV ad aired in 1941. The first collaboration – of sorts – happened well before that. Josiah Wedgwood and Sons, a chinaware company, worked with the British royal family on a marketing campaign before marketing campaigns even existed, way back in the 1760s.

A couple of hundred years later, H&M worked with Karl Lagerfeld, creative director at Chanel, in a landmark 2004 collaboration that saw a combination of high street and high fashion. Pretty soon everybody was at it, creating high-profile campaigns that involved everything from billboard advertising to catwalk shows: Topshop x Kate Moss, Dolce & Gabbana x Smeg, Heidi Klum x Lidl (serious). Diesel even did a range of clothes with a Berlin kebab house.

This is all grist to the mill for the designer, illustrator, typographer. It's all too easy to stick to what you know. A collaboration can take you out of your comfort zone, make you push yourself, get you experimenting a bit. And right now, we have a range of incredible collaboration tools that make things much easier. Here we use five of the best brand collaboration projects as case studies, and take a look at why they work and what you can learn from them.

Louis Vuitton's 2017 autumn/winter collection included a collaboration with Supreme. This was a big deal for a few reasons. It was Supreme's runway debut – at Paris Fashion Week, no less – impressive, considering the streetwear brand began life as a little skate shop on Lafayette Street in New York City in 1994, and Louis Vuitton was founded in 1854.

But this wasn't a big brand doing a little brand a favour. Few companies can currently match Supreme's clout when it comes to streetwear. This was a smart move for both brands. Supreme got a nod from high-fashion, while Louis Vuitton upped its credibility on the street (although, to be fair, a brand new car cost less than a Louis Vuitton x Supreme trackie top, so you're unlikely to see one on the lads standing outside the corner shop). Plus, the timing was right. In 2017, streetwear and high-fashion were overlapping in new and slightly strange ways.

What can you learn from this brand x brand collaboration? Kim Jones, the then style director of Louis Vuitton men’s ready-to-wear department, said the collaboration was inspired by the diversity and creativity of '70s, '80s, and '90s New York City: "It’s uptown and downtown… Artists and musicians, friends and heroes."

I doubt there was much Louis Vuitton kicking about in downtown NYC in the '70s. But that's not the point. The message here is, sometimes, it pays to hook up with that brand from another world, to go with that weird client – especially if the timing's right. You take a bit of what you do, a bit of what they do, and hopefully you come up with something that really works.

Jayde Cardinalli's had some sizeable jobs recently – Starbucks, Facebook, Apple. Things got going for the California illustrator and designer in 2016 when a potential client messaged her on Instagram. She'd been posting pictures from her first solo show. Alessandro Michele, creative director at Gucci, wanted to use these drawings in the spring/summer 2017 line. Cardinalli's solo show wasn't even finished, but she sold 17 pieces to Gucci. Michele used these images to create prints and embroidery.

Michele is known for giving breaks to up-and-coming illustrators. For example, Trevor Andrew was known for 'repurposing' Gucci's brand on walls around Brooklyn. Michele didn't get the lawyers involved. He gave Andrew a job. Michele has a clear vision of what Gucci as a brand looks like. He chooses illustrators whose style matches that – stuff that's a bit odd, a bit eccentric. His view is: it doesn't matter how much experience you've got. If you're good, you're in.

So rather than focusing on a potential collaborator's experience or reputation, think about whether or not they're a good fit for the project you have in mind. Gucci's work with both Cardinalli and Andrew were both hits and turned into long-term collaborations.

OFFF is one of Europe's best design festivals, a place where creatives from around the world the meet up and talk shop. This year, attendees – and passersby – saw Craig Black painting a Fiat 600 car. Black, known for lettering installations and murals, was speaking at the festival. This live demonstration was to promote the event and one of its sponsors, local beer company Moritz. "What excited me most," says Black, "was the interaction with the attendees of the festival and the public while I was painting the car. The response was incredible and it was great to see how it puts a smile on people’s faces."

With the rise of influencer marketing, it's easy to open yourself up for criticism by doing sponsored work – especially if it's the wrong kind of work for the wrong kind of company. But here, Black is doing what he does best: big typographic illustration in a unique space, sponsored by a company local to the festival.

OFFF communications director, Nathalie Koutia, explains why the collaboration worked so well: "Craig did a wonderful job on painting the Moritz famous 600 car. From the feedback we had in person and on social media, everyone really enjoyed watching Craig bring this concept to life, it was certainly a highlight of this year’s festival."

The lesson here? Do what you do best for a brand, and you could be on to a winner.

Converse does what every brand wants to do: it appeals to a broad demographic. Everybody likes Chuck Taylors, from your scruffy guitar band to your well-groomed rapper, from skaters to fashionistas, from Elvis to Beyonce. But even a brand like Converse has to work at it. It has to constantly attract the next generation of Chuck fanatics. It has to somehow stay the same and change with the times.

"We have no age, no gender, no sex – I want everyone to feel included," Miley Cyrus said about her third and most recent Converse collaboration. Her first collection incorporated the musician’s hand-drawn designs and were created for "all body shapes and sizes". Her second collection included rainbow-coloured platform sneakers to celebrate LGBT Pride Month. Her third collection is vegan and unisex. Miley Cyrus being Miley Cyrus, the collection includes velvet shoes, velour sweatshirts, and glitter bodysuits.

The thing about being an "everyone" brand is… everyone's pretty hard to please. Chances are you won't see Kendrick Lamar or Lil Wayne wearing the Converse x Miley Cyrus platform hi-tops. This collaboration was always going to get a load of stick, but that makes it all the more bold. Signing up somebody like Cyrus means you're also signing up her huge fanbase and with it a whole new generation of Converse devotees. What makes it such a good collaboration is that each collection focuses on issues relevant to the target audience, which is definitely something to bear in mind for your projects.

Any agency would jump at the chance to work with Nike. But it's not without it's challenges. Studio Feixen is an independent studio based in Lucerne, Switzerland. The small team can turn their hand to everything from graphic design and typography design, to interior design and fashion. The studio has been collaborating with Nike for a while now.

A recent commission asked Feixen to come up with concepts for Air Max Day ("regarded as the kid’s birthday party (Yes, seriously!) of the Nike Air Max series"). which takes place annually around the world. Nike has been part of some properly classic ad campaigns. So Feixen had all that history to contend with. But there were also some rules: the font, for one, is well established.

If the font couldn't be changed, then it could certainly be rearranged: "We experimented with typographic systems that disregarded the laws of gravity," says Studio Feixen on its website. The result was a series of print and digital materials that saw various slogans collapse, float, scrabble, bounce. The gifs, in particular, made you stop and focus until the letter and words arranged themselves into the right order.

The lesson here? Collaborations with big brands are great, but the bigger that brand is, the more pressure there is to perform. Especially if that brand is known for being a leader in design and marketing. Studio Feixen got it spot-on here by choosing to mix things up and play around with the existing branding.