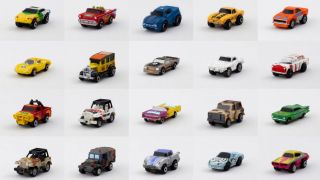 Micro Machines collector Tim Smith has turned his obsession with the 80s miniature toy cars into an online showroom for the enjoyment of other fans and collectors. The labour of love, called Micro But Many, is based on Smith's own collection of some 1,000-plus Micro Machines toys, with each one lovingly photographed to show off their intricate detailing.

Smith, who also heads up ustwo Auto – a digital product agency that looks at design challenges around cars – has a long history with Micro Machines toys, having collected them as a child. With Micro But Many, he's keen to see if other people share his fascination with the miniature motors.

"Given most Micro Machines are modelled on real cars, I’m hoping the site will appeal to collectors, car enthusiasts and children of the 80s and 90s in general," he explains.

The online showroom displays the cars at their best thanks to close-up photographs. Visitors can learn more about the different models, including their scale, rarity, toy brand and more by clicking on the photographic tiles on the homepage.

Alternatively, if you're looking for a half-remembered toy from your childhood, you can search through the cars by entering unique characteristics into the search tool.

The nostalgia trip is bittersweet for Smith, though, who as a boy built up his collection by hook or by crook. "They were expensive for a small boy, but thanks to playground swapping and thieving, I managed to amass about a hundred of the things," he reveals.

"One day my 'friend', Mark Baldwin, offered to buy them all from me for a measly 50p. He could sense my desperation to buy a stainless steel Teenage Mutant Ninja/Heroes Turtle coin I saw for sale in Woolworths. I accepted his offer.

"I regret that decision to this day. Over the past few years though, I have recommenced my collecting and now have over 1,100 of the burglar prevention tool used by Macauley Culkin so effectively."

New cars will be added over time, but with Smith's collection falling well short of the more than 6,000 Micro Machines models, he's going to need your help. So if you've got any Micro Machines toys knocking around in an attack or under-stairs cupboard, be sure to dig them out and arrange a swap. If you've got a model Smith's after, you might even be able to make some money in the process.