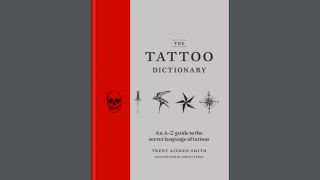 Dating back thousands of years, tattoo art still remains a common means of expression. Over the centuries popular designs have evolved and taken on lives of their own, but in the process their story and meaning gets lost to time.

To educate people about the fascinating history of tattoos, The Tattoo Dictionary by Trent Aitken-Smith explores the meaning behind over 200 popular designs.

Filled with meticulous research, The Tattoo Dictionary is bound to contain facts to surprise even the most die-hard of body artists. Get a taste of what to expect with this extract revealing the history behind five iconic tattoos, and buy the book for the full story.

There are very few world cultures that have not revered, or feared, dragons in their mythology or legends. Dragons have long been popular in art and literature, but to the Japanese the dragon (ryu) is not the fire-breathing terror of the European or Western imagination. For the Japanese, the dragon symbolizes wisdom and strength, as well as being the protector and guardian of human beings on the earthly plane.

Dragons in the West were envisioned as reptilians with wings and four limbs, while in the East they were wingless and snakelike. Within the Asian culture of tattooing, dragons can vary greatly from artist to artist and often their faces will be a combination of many different animals’, while still retaining the wingless and snakelike body.

Another important aspect of Asian dragons is that they will often be depicted clutching a sphere, jewel, or orb (the closed lotus form) in one of their claws. This is meant to represent the essence of the universe that the dragon is able to control and manipulate, and is a motif that can often be seen in Buddhist temples.

Though Chinese and Japanese dragons can seem similar, one of the ways of telling them apart is by their claws: Chinese dragons usually have five claws while Japanese have just three. Because dragons have been so strongly linked with Japan and China, in the naval context a dragon tattoo was used to represent a sailor who had served in Asia.

Dragons are also featured in the mythology of the British Isles, most notably in the legend of Saint George and the Dragon, and is thus a popular choice as a means of showing patriotism and heritage; the red Welsh Dragon serves a similar function. The colour of a dragon, whether it has horns or not, and what form it takes, all have various meanings, and it is therefore important to know such details when choosing a design.

Most commonly associated with the United States, especially the US Marine Corps, where it is incorporated into the insignia along with a globe and an anchor, the eagle – as a symbol of strength, freedom, wisdom, and power – has been in use for centuries. In religion, the eagle has often been associated with the sky god – often the most important deity.

The ancient GrecoRoman god Zeus/Jupiter had his own eagle, named Aquila, who carried his thunderbolts and his messages, and sometimes took the form of an eagle himself, as in his abduction of Ganymede. Whenever the symbol of the eagle is used, it is to show power or dominance. But not only is it a sign of brute strength, but also of knowledge and foresight, and the power that comes with those, too. In Freemasonry, a double-headed eagle is used as a sign of the union of opposites.

A universal symbol for strength and solidarity, the raised fist has been used by many different subcultures as a sign of resistance and power. The image is thought to date back to ancient Assyria, where it was used as a salute in the face of a violent enemy.

Over the years it has been used by many different factions, from citizens in Mexico fighting social injustice, to resistance fighters in the Spanish Civil War (1936–9). Probably the best-known raised fist was the one adopted by the Black Panther Party as a means to show support for Black nationalism and solidarity among the African-Americans – as most famously by the athletes Tommie Smith and John Carlos at the Mexico Summer Olympics in 1968.

The author Hunter S Thompson (1937–2005), founder of the gonzo journalism movement, used the raised fist as his logo when running for sheriff of Apsen, Colorado, adapting the standard design into a double-thumbed fist clutching a peyote button. Though he failed to win, the design will be forever associated with Thompson and gonzo journalism.

An old and still-popular design through out the Middle East and North Africa, the hamsa hand is a palm-shaped charm or amulet that is used as a form of defence against the evil eye. (Indeed, in many cultures around the world, an open right hand is seen as a sign of protection.)

Found as a motif in jewellery and on wall hangings, the hamsa is often decorated with mesmerizing patterns and other intricate details. Because this talisman is thought to protect against the evil eye, the hamsa hand is itself often shown with an eye in the centre of the palm.

One of the most iconic images within the oldschool lexicon of tattoos, Man’s Ruin – and variations on it – can be found on old flash sheets as well in the portfolios of modern artists. The central motif of Man’s Ruin is usually a sexy, seductive pin-up girl, who is surrounded by all the vices that can ultimately lead to a “man’s ruin”.

Commonplace, along with the often scantily clad woman, are drinking glasses, bottles of alcohol, and all the usual signs and symbols of gambling – dice, cards, eight-balls, and horseshoes. In the tattoo parlours of the past, the Man’s Ruin image could often be found displayed alongside an almost identical design entitled Man’s Vices, which leads one to believe that the tattoo was probably more tongue-in-cheek than serious, representative more often that not of men’s pleasures rather than their ruin.

Imaginative new-school artists have reinterpreted Man’s Ruin over the years, keeping this old-school design current with changing times, and adding new vices such as modern technology.

For the full list of over 200 tattoo stories, buy The Tattoo Dictionary online.