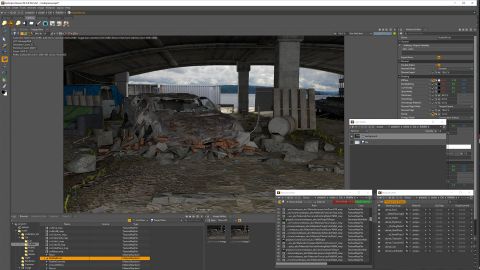 Versatile and fast, Clarisse 3.0 is a useful addition to most pipelines, if a little expensive for freelancers and small studios.

A layer-oriented combination of a CPU-based render engine, compositing and (non-character) animation software, Clarisse fits into the niche between KeyShot and Nuke, enabling you to work on work-in-progress shots or final digital mattes, look development and/or VFX and animation for 3D movies.

Everything in the application – even shading, lighting and anti-aliasing – is entirely independent, which in addition to geometries and textures being path-based, gives the application its already famous speed and versatility. In fact, that speed has been boosted even more in Clarisse 3.0, as Isotropix has added PBR rendering in addition to its already powerful Monte Carlo sampling unidirectional path tracer.

In addition, this release is packed with new features and enhancements for creating 3D art, ranging from UI improvements to a freshly minted UV baker, motion-blurred volumes, volumes defined by surfaces, geometry shape controls, fur improvements and viewport enhancements – for example you can now create a camera from your current viewpoint.

While the new feature list isn't as extensive as version 2.0's, there are some standout features: one of them is, of course, the new PBR renderer, bringing with it a state-of-the-art range of lights, volumes and materials to work with; you now get fur, SSS and iridescence, helping you to hit new heights of photorealism.

Controlled at the path tracer level, it's a bit slower than the original renderer, but the trade-off is better sampling for less. Even though render times will always depend on your hardware and render-setup, I didn't notice too much of a difference compared to a max-sampled KeyShot 6 render in a simple, low-sample scene.

In addition, a new geometry type has been implemented: Volume Surface enables users to generate volume density from a surface, thereby boosting the improvements that having a physical renderer brings to the new Volume material. OpenVDB Volume files also get a little TLC with this release, as they now support deformation motion blur, something which has also been implemented for Alembic meshes.

UV Baking is another great feature too, enabling you to bake your shaders in various projections, complete with UV edge padding capabilities and a widget for showing UVs and textures. A benefit of this implementation is that fur now also supports UV maps, and can store multiple colour values and radiuses per curve.

What impressed me most is Clarisse 3.0's versatility, accessible learning curve (provided you figure out where they've put things) and how much time it can shave off any pipeline. The fact that everything you're working with is so accessible and easy to modify – be it heavy production items or generic work stills – makes Clarisse 3.0 a useful addition to most pipelines.

One thing I'd have liked to have seen is more import options, for example FBX support, as Clarisse currently only imports Alembic files in addition to .OBJ and .LWO formats. Isotropix could have given the current importers some attention too, as objects import as a single mesh with shading groups only, making complex objects harder to edit.

It would also have been great to have drag-and-drop texture loading. The incessant File>Import on complex files gets really tedious after a while, and it also costs you a little of the creative speed the application provides. It's also a pity the pricing still hasn't come down enough for small studios and freelancers yet.

However, these are minor issues with what is a quality, accessible must-have release.

Versatile and fast, Clarisse 3.0 is a useful addition to most pipelines, if a little expensive for freelancers and small studios.