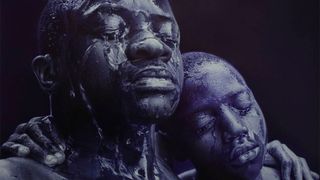 Photorealism will fool you into believing an artist has managed to do the impossible and create a photo using paint, their best pencils or even inks. It is an art technique that creates artwork so realistic that the boundaries between reality and imagination blur: the results will make the viewer do a double-take.

For this article we have found the very best, mind-boggling examples of photorealism to inspire you. These pictures have been created with a pen, pencil or brush with incredible attention to detail, so much so that you will wonder if the artists have cheated and used a camera. So, let's take a look at some of the best photorealism around.

Nigeria has become a hotbed of photorealistic art over the last few years, and one of our favourite practitioners is Oscar Okonu. He creates his large-scale photorealistic images using only a ball-point pen on paper, and the results are stunning. Each work takes him over 100 hours to complete, and he estimates that he gets through approximately ten pens per piece.

If Gottfried Helnwein's incredible photorealistic work seems a little unsettling, it's with good reason. One of the best-known and most controversial German-speaking artists since World War 2, his hyperrealistic paintings often feature children, sometimes wounded or bandaged, sometimes in Nazi uniforms. Helnwein tackles difficult and controversial subjects in his work, and his painstaking attention to detail makes them it all the more provocative.

David Kassan's life-size photorealistic paintings can take him anywhere between two months and two years to complete; he says that he doesn't simply try to replicate his subjects, rather he tries to capture their essence and imbue them with their own voice. He's currently working on a project with the USC Shoah Foundation, for which he paints portraits of Holocaust survivors that will be exhibited along with their written testimonies and short films.

Elizabeth Patterson's artistic career was put on hold in 1984 after a severe injury left her without use of her drawing hand. Returning to art 15 years later, she hit upon her defining style: urban scenes as viewed from the behind a car windscreen in the rain, drawn using coloured pencil, graphite and a touch of solvent, which manage to be both impressionistic and photorealistic in their execution.

Born in Italy and based in New York, Ester Curini is a self-taught painter who specialises in highly detailed animal portraits set against stark white backgrounds, often in startlingly human poses. "Capturing the unique energy, essence and spirit of each creature I paint is the centre of my work," she explains. "Isolating the figures on seamless white backgrounds lets me concentrate only on the essentials that matter to me."

For a masterclass in photorealism, look no further than American artist Richard Estes. One of the foremost practitioners of the late 1960s international photorealist movement, Estes primarily paints stunningly convincing urban scenes.

Estes compiles his compositions from multiple source photographs before reconstructing reality in hyper-real renderings. Look closely and you'll often see a reflective surface, such as a shop window, enhancing the scene with additional details.

Italian-born artist Diego Fazio, aka DiegoKoi, refined his skills when he first started out by drawing koi. Years later, the water in his incredible portraits looks as though it's been caught on camera, but his artwork is, astoundingly, drawn in pencil.

The London-born, Italy-based artist started out in still life before developing her technical skills, and has received worldwide recognition for her stunning hyperrealistic paintings.

Space Guns, pictured here, is a striking six-foot oil-on-linen masterpiece that enlargens the toys to several times their actual size.

Pedro Campos didn't begin oil painting until the age of 30. Now in his 50s, his incredibly realistic still life shots, city and seascapes are regularly mistaken for photographs.

The Madrid-based artist lists Lucien Freud, Richard Estes, Francis Bacon, Antonio López and Anish Kapoor among his influences. He's best known for his pictorial attention to detail and a series of drinks cans and fruits wrapped in plastic sheets.

Based in Cheshire, UK, Rob Hefferan is an exceptionally talented figurative artist. Working predominantly with oil and acrylics, Hefferan focuses his photorealistic work on that of portraits. His attention to detail on the skin and folds in fabric make his work utterly wonderful.

Juan Francisco Casas Ruiz is a Spanish visual artist. He has been exhibited in New York, Miami, Chicago, Seoul, Singapore, London, Paris, Mexico and Basel, and received numerous awards. His work is represented in major collections including the Museum Atrium, or the ABC Museum, and in private collections around the world.

Halim Ghodbane's attention to detail is breathtaking. His portraits are often covered in gorgeous soft lighting, highlighting his impeccable brush skills. He even dabbles in celebrity portraits. Check out his work for some photorealistic inspiration.