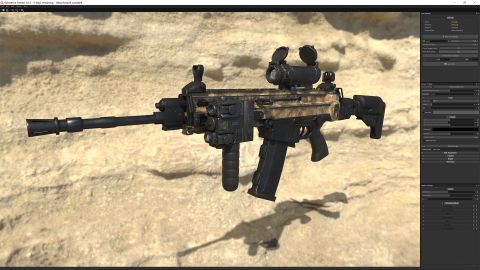 With new tools and more power, this is an essential addition to any 3D artist's workflow.

Allegorithmic's flagship application Substance Painter 2 comes with new tools, like Clone and Smudge. In addition to many tweaks and fixes, it now also sports an Iray/Yebis hybrid, Lumberyard and Specular/Glossiness PBR workflow support.

Out of the box, Painter 2 feels smoother when using brushes and detailing – on tablet and mouse. This may be due to the release's listed improved viewport feedback when the engine is doing strong computations. In addition, there have been some additions to the toolbar, like the new Smudge and Clone features. These provide a non-destructive workflow and work roughly the same: create new layer, select and set the layer(s) you want to clone to, or smudge to pass through, and have at it.

The Smudge tool is pretty straight forward, but Painter's Clone tool isn't entirely like, for example, Photoshop CC's: cloned layers aren't rasterised, and any change you make on the source (layer) will also be applied on the cloned. This can be a small hassle if you want your cloned layer(s) to be unique, but nothing an extra layer and tweaking won't fix.

In addition, Painter has been given some of Designer's functionality, namely an Iray/Yebis setup allowing the user to generate actual renders, in addition to the vanilla, non-shadowed OpenGL renders you see in yourAllegorithmic have also put some rethought into Painter's shelves; the mask generators in particular workspace.

Allegorithmic have also put some rethought into Painter's shelves; the mask generators in particular. Here you'll find one of its best new features: the new Mask Editor and Smart Masks. Replacing the mask builder from earlier versions, Painter's mask-generating capabilities have now been put into one big, beefed up generator. This provides a lot more control than the earlier ones, and makes better use of the baked maps from the Additional Maps slots. This allows vast flexibility in how and what you mask, down to Quixel-like control over the baked maps you've added. Combined with the ability to use materials as well as procedurals, you can create even more detailed masks for your textures. And as an added bonus, you can save and reuse the outputs of the generator as Smart Masks.

No release is perfect and Painter is no exception. The shelf could've benefitted from a setup like ZBrush's Lightbox, instead of giving it more content, no matter how nice. If you're on one of the new UHD screens, you may need to squint a little as font scaling hasn't been implemented yet. You may also run into an issue with the Iray/Yebis hybrid going into black and sometimes not remembering its settings. But the Painter team is very present in its forum and they fix their bugs fast.

These issues aside, it's a rock-solid release, and if you're looking for ease, speed and excellent output, this is worth checking out.

With new tools and more power, this is an essential addition to any 3D artist's workflow.