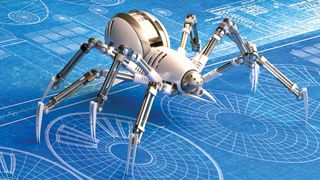 Rizom-Lab has released the first major update of the year for its standalone UV mapper, RizomUV. UV mapping is a vital part of 3D artists' workflow and so RizomUV has helped many. But what's new in the latest version of RizomUV?

"We started developing RizomUV 2019 in 2018," says Cirstyn Bech-Yagher, product manager at RizomUV. "One of our biggest and best development tools is our community. We ran a poll with user-suggested features, which we then worked on implementing." The team at Rizom-Lab realise ease and quality of life are as important a feature as continuously improved 3D art tools, hence their dedication to inviting input and discussion from the community.

Since 2017 RizomUV has been speeding up users' UV mapping processes by providing automatic as well as manual UV unwrapping and an easy-to-use toolkit to go with it. It is the brainchild of Rémi Arquier, who started Rizom-Lab in 2016. The company takes its name from a perpetually growing, underground root system called a rhizome, reflecting Rizom-Lab's own refusal to stop growing.

The company's products are used in pipelines across VFX houses, game studios, freelancers and hobbyists. They are a vital part of the toolkit for modellers and sculptors, as well as texture and CAD artists. The company's mission is to create the ideal UV mapping toolset for any pipeline.

Among the updates in RizomUV 2019 is a new script launcher panel, which allows users to load and store relevant scripts after using the LUA scripting tool. There is also the addition of a growing script library, including a starter script that lets users select an edge, and leaves the script to find similar edges, unwrap and pack them.

Elsewhere there are point-snapping improvements for vertices, edges, polygons and island selections to vertices located on an island's border. Grid snapping distance can now be viewport zoom grid or absolute distance based. FBX enhancements mean that Island Groups, UDIMs, tile geometry and island properties are now saved into FBX files.

Similar island stacking changes ensure that RizomUV now takes the current island selection as a working set, which means that the first island selected is now the reference island and destination position. In addition to this, both viewports can now display either Flat or Unflattened or Both Flat and Unflattened islands. Tools and commands will be applied to what is currently displayed in the viewport under the user's mouse pointer. Finally, in-panel statistics island, group and tile selection are now displayed condensed and in colour.

According to Bech-Yagher the scripting panel and the growing library of scripts are the most significant updates to RizomUV. "One of our scripts lets you make a single cut, and the script will then copy the cuts to matching geometry, unwrap and pack it for you," she explains.

Updates such as RizomUV 2019 are increasingly important as the market for UV mapping applications grows ever more demanding. "With the emergence of tools like the Substance suite and Quixel's MegaScans tools a few years ago, texturing has gone through a fantastic revolution," says Bech-Yagher. "However, not all UV problems can be solved with a triplanar map, and now more than ever, ease of texturing demands a solid canvas to speed up your workflow. That's where we come in." Rizom prides itself on being light and fast, alongside its ability to auto-unwrap.

When asked what sets RizomUV apart from its competition, Bech-Yagher adds: "We have some of the flattest and fastest algorithms around, together with a super-friendly UI. Besides, our developer has worked with UV mapping algorithms for almost 20 years, so if there's something he knows how to do, it's how to get it flat, and fast."

After a short vacation the team at Rizom-Labs will begin fleshing out features for the upcoming autumn and winter releases. "One thing we've learned is that we need to take a look at how we can improve the workflow for what's called 'dirty' or 'messy' geometry," explains Bech-Yagher, "which typically is a mix of subD and CAD mesh, and that mix of tris and quads doesn't always play nice together. I'm sure we'll ask our community what they'd like to see as well."

RizomUV 2019 RS, VS and SDK updates are free for currently licensed users. New users can purchase a variety of licenses, ranging from student licenses at a 70% discount, Indie pricing at a monthly cost of €14.90 and annual rates of €149.90, as well as Pro and SDK licensing. Find out more here.

This article was originally published in issue 135 of 3D Artist. Buy issue 135 here.