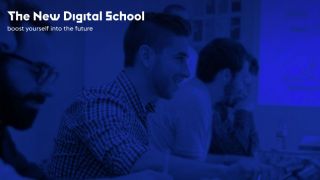 The other day I realised that it's been 10 years since I started teaching. I never thought I would become a teacher; it just happened. But I remember that from day one I decided I would consider my efforts a success if I was able to create passionate new designers.

One day in my second year of teaching, one of the students – an industrial design major – came to tell me he had a great idea  for his personal website. "As you know, I do a lot of 3D, so this is going to be my site," he said, as he held a cardboard box in front of himself. "When you arrive at the website you'll see this side, and when you click one of the menu items the whole box will rotate to the page you choose."

"But do you know how to build it?" I asked. He replied: "I haven't got a clue!" Was he wrong in wanting to do it? In having no constraints in his creative process? I don't think so. But back then the only viable way to implement his idea would have been using Flash, and even that would have been tough.

So I persuaded him not to do it, and to go with a more standard approach, which he did. He quit my class a couple of weeks later. To this day I regret that I didn't act differently and just pushed him back to the norm.

A few years later I was teaching an HTML and CSS module, and was able to finish all my work a class earlier than I had planned. I decided that with our extra time we would do a free-topic class. Someone suggested we should talk about estimating projects, time-tracking and project managing, and I agreed.

Unlike most keynote-based or live-coding classes, this class attracted the best attention rate ever. Students were highly engaged and eager to know the stories behind the projects and if they'd gone very well or terribly badly. There can't have been a single one who got distracted for a second.

These two situations are examples of times when choosing to follow or defy the classroom norms affected the outcomes in extreme ways. These norms of traditional academia were conceived under the economic circumstances of the Industrial Revolution; a time when standardisation and conformity where key factors for success. Today they are merely educating students out of their creativity and limiting their potential for success.

Year after year we witness companies and industry leaders stating how badly prepared new applicants can be when applying for jobs. We have no idea how the web will look in five years' time, let alone in 30 or 40 years. Still we're insisting on teaching a fixed curriculum.

In the second scenario, by giving students the ability to define what they wanted to learn I had set the cornerstone for a completely different vision of how to teach. Back in June, that vision saw the light of day as we announced our plans for an international web design school. Built by the community and for the community, it would have no fixed curriculum, no assessments and no faculty in the traditional sense. We called it The New Digital School and it opened in January 2017 in the sunny city of Porto, Portugal.

The approach at the New Digital School is completely student-centred. The students define what they want to focus on. Their success will be measured by their employment or the projects they launch, so there's no traditional assessment. We're asking industry partners to brief real projects, thus providing the students with real-world experience. And last but not least, every month we'll host masterclasses with amazing guest lecturers like Jeremy Keith from Clearleft, Aarron Walter from InVision or Stanley Wood, design director at Spotify.

There's an old saying that goes: It takes a village to raise a child. One of the powers of the web community comes from how we share knowledge and continue to learn and absorb. Web creators get to stand on the shoulders of giants, making use of open source knowledge and tools.

If we make sure we don't waste time with bad and shallow education, we can help raise the status of the design profession and push the boundaries of what we do. I believe this is not a single teacher's responsibility. That role belongs to every single one of us. As a community.

This article was originally featured in net magazine issue 288; buy it here