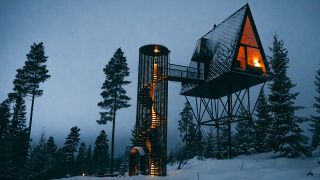 Two tiny triangular houses in Norway have sparked fierce debate on Reddit. The 'Pan Treetop Cabins' are named after the Greek god of forests and meadows and draw inspiration from the Moomins' magical homes in the work of Tove Jansson.

The homes themselves are fitted compactly into A-frame cabins, clad in black oxidised zinc and steel. These are perched, seemingly precariously, on spindly stilts. Visitors access the cabins via free-standing spiral staircases and elevated walkways. The lofty abodes were designed by architect Espen Surnevik and are located in Gjesåssjøen, Norway. Take a video tour below.

These charming, long-legged structures are a passion project driven by journalist Kristian Rostad and actress Christine Mowinckel, who recruited some specialists to help bring their vision to life.

The houses have actually been nominated for several design awards. However, that hasn't put off grumpy commenters on Reddit, who have plenty to say about just how impractical they think the design is. Let's take a closer look at some of main lines of argument and try and answer the question: is this the most magical home design in existence, or is it wholly impractical?

For more architectural triumphs, both practical and impractical, explore our guide to the world's most famous buildings.

Many commenters seem extremely worried about the spiral staircase that provides access to the cabin. "I'm thinking about coming home with multiple bags of groceries after working OT. It's a nope," says one. Have these people never lived in a flat? Or even a two-storey house? Look at the scale here – it's two floors' worth of steps maximum. Able-bodied visitors, you can probably manage it. Even while holding your bags of kjøttboller and aquavit.

On the same theme is the issue of decorating the flat. "Getting the furniture in there must have been fun," jokes one Reddit user. They may have a sort-of point here. But then again, it's a very small cabin, and it's already been furnished. How those first interior designers got the sofa in will remain a mystery, but until it comes time to redecorate, it's not an issue.

"Better hope it’s not windy," writes one concerned commenter. Obviously, this has been addressed. Those legs may look spindly, but they are powerful. In fact, a scientist – Finn-Erick Nilsen – was enlisted to make the calculations that would ensure the structure was nice and stable. The designs can apparently "withstand the force of a double hurricane". There's an added bonus in that you'd never have to worry about flooding, either. And we're betting any heavy snowfall would slide off that steep roof no trouble.

03. Is this a zombie apocalypse house?

We'd have to do some more research to properly assess how this Moomin-style house would fare against a zombie army, but on first impressions we think it looks pretty good. "Zombies would take those skinny legs out in no time," says one commenter – but we've already debunked that theory (see discussion point #2 above).

In fact, while a zombie invasion remains distant, there are practical benefits you can enjoy today. These huts are two hours from Oslo, in a huge ecological reserve – which means there are plenty of elk, venison, wolves, bears and lynxes roaming around. So perhaps it is better to be a little elevated.

04. You forgot to build the other half!

"I think they forgot to build lower floors" says one commenter. "The scene hasn't finished loading yet," quips another. Neither are really valid points. One major selling point here is the views. And the whole aesthetic plays on the idea of a charming little treehouse from a storybook. You want a massive triangular base on that? No. It'd ruin it. Size isn't everything.

05. What about wheelchair users?

Entirely valid. Can't argue here, this is no good at all for anyone with mobility problems. Perhaps the next version could find a way to integrate an equally magical lift? It's also going to be a bit of a nightmare for tall people, but they can probably just stay right in the centre.