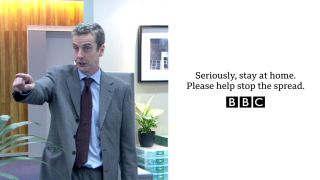 The BBC has launched a series of videos using clips from classic comedies to communicate a simple message to the public: "Seriously, stay at home". The beeb has managed to find impressively appropriate clips from four beloved shows (The Mighty Boosh, I'm Alan Partridge, The Thick of It and Miranda) to tell us all to stay indoors to slow the spread of coronavirus.

Appearing on BBC television and social media, the ads feature humorous scenes on the theme of isolation or staying at home. For example, the clip from I’m Alan Partridge (below) shows Alan preparing for a James Bond-a-thon in his caravan, with a hilariously strict timetable ("1:15 - Goldfinger, strawberry Nesquik, fishcakes"). The ad ends with the text: "Set a routine to get through staying in".

If you're looking for more advertising inspiration, check out our best print ads ever.

The clip from the Mighty Boosh, meanwhile, features the Isolation song from the episode The Legend of Milky Joe, in which Howard and Vince become stranded on a desert island with only some rather sinister coconuts for company. Boosh fans have no doubt been singing this to each other for days:

Next up is a hilariously appropriate clip (below) from political satire The Thick of It, featuring Peter Capaldi's famously foul-mouthed Malcolm Tucker telling his staff: "Right people, listen up. It’s a fucking lockdown right now. This is the fucking Shawshank Redemption, right, but with more tunnelling through shit and no fucking redemption." While the other three clips will appear between shows on TV, this one remains, thanks to the language, online-only.

And finally, a clip from Miranda (below) features her conducting a piece of classical music for an orchestra of kitchen utensils and groceries, after telling the viewer, "previously in my life, I've proved that living alone can be genuine fun".

The four ads are an entertaining way of getting across a serious message – and ending a comedy clip with the word 'seriously' is a smart way of bringing that home. The appropriateness of each clip is impressive (who knew so many comedies made explicit references to isolation and lockdowns?) but of course, the BBC has a rich history of programming to delve into.

While not every brand's response to coronavirus has been a success (such as McDonald's recently-deleted social distancing logo), this is a simple but effective offering from the BBC, as well as a reminder that there's lots of classic comedy available to cheer us up while we're all stuck at home.