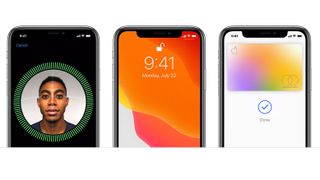 Face ID. What a brilliant invention. Or, it was, until the pandemic rendered the technology virtually useless. If you're an Apple user who has started wearing a face mask, you'll know the problem we speak of: Face ID can't recognise you with a face mask on. But worry not, it seems that Apple has a solution up its sleeve.

Now in beta, iOS 13.5 will bring up the passcode screen when you're wearing a mask. It's not that Face ID will suddenly recognise you adorned with your mask but instead, the system will clock that you're wearing a mask and prompt you to swipe up and enter your passcode, removing the frustration of waiting for the face recognition process to fail.

As pointed out by @Sonikku_a2, if you’re wearing a mask, iOS 13.5 goes straight to the passcode screen if you try to unlock with Face ID (keypad not shown because iOS hides it in screen recordings) pic.twitter.com/bQCzu5u20pApril 29, 2020

It's brilliant news that Apple has found a solution for this issue (see the above tweet for how it might look), which will begin to affect more of us as we're increasingly advised to wear a face mask at all times. The current options are less than ideal – with users waiting for Face ID to fail (pretty irritating), turning off Face ID altogether (you want your phone to be at its most secure when you're out), or taking their masks off for a second (virus exposure and touching your face is a clear no-no).

Folks on Twitter questioned the necessity of Apple's intervention, by suggesting other solutions, such as providing an alternate appearance photo, but it seems that the system blocks the attempt with a 'Face Obstructed' error message (below). Others bemoaned the lack of Touch ID on newer Apple models – though gloves would cause a problem with this, too.

Users of Apple Pay will be some of the most grateful for this update. Given that contactless payments are the safest way of completing a transaction at the moment, this workaround will save time hanging around at the checkout.

Though it's unclear when exactly this version will be released, Apple has been pretty quick off the mark with its updates of late, and this is a timely issue so we'd hope it won't be too long.