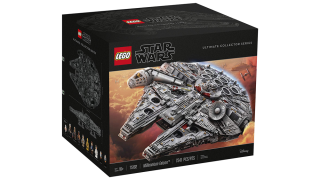 If the epic Lego Star Wars Millennium Falcon set has always been on your wishlist but its monumental price tag has put it out of bounds, you may well be in luck. A recent Amazon US press release has detailed some early Black Friday deals set to land this Friday 22 November, and it includes a 40% discount on the 7,000+ piece Lego Star Wars Ultimate Millennium Falcon.

Usually retailing on Amazon at $999, this incredible saving would take the impressive Star Wars Lego set down to less than $600 – the lowest price we've ever seen.

Don't get us wrong, we know $600 is still a lot of money to spend on Lego. But If you're a fan of Lego, Star Wars or both, this is the (very aptly named) ultimate in Lego art. The level of detail and sheer number of pieces (7,541 in case you were wondering) it takes to build in its entirety is mind-blowing. The set highlights favourites from the 1977 film, including Han Solo, Chewbacca, Princess Leia and C-3PO minifigures. The main hold features a seating area, Dejarik holographic game, combat remote training helmet, and engineering station with turning minifigure seat. The rear compartment features the engine room with hyperdrive and console and two escape Pod hatches.

Whether you're a Lego collector, or a creative simply looking to splash out on a treat, if the Lego Falcon has long been on your wishlist, now is the time to buy. A 40% saving is the biggest discount we've ever seen on this Star Wars Lego set, and there's nothing to suggest it will come up again in the near future.

The only slight caveat is the press release not detailing the unique Lego set number. It does, however, name the set as Lego Star Wars Ultimate Millennium Falcon, which is an exact match for model no 75192. Here's hoping Amazon isn't playing Yoda-like mind games and the press release does, in fact, refer to this very set.

The epic early Black Friday Lego deal is due to go live on Friday 22 November, so stay tuned and we'll update this post as soon as it goes live. In the meantime, here are the best Lego Star Wars Ultimate Millennium Falcon prices in your area: