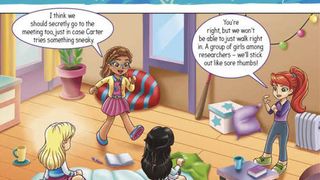 Lego has come under fire for a comic strip that features in its magazine, Lego Friends, which has been deemed sexist. This is one of those cases where you hope that people might be over-reacting, but then you click on the actual magazine – which is aimed at girls aged seven to 11 – and your heart sinks.

The comic in question shows a group of girls who decide to sneak into a meeting. One of the characters says that they won't be able to just walk right in because: "A group of girls among researchers – we'll stick out like sore thumbs!" (The astute among you will point out that Lego figures don't normally have thumbs, but these characters do, so therefore can apparently stick out like sore ones.)

The girls then decide to dress up as bakers and hand out muffins, so that "nobody will suspect a thing!" One of the girls is excited about designing uniforms, another hopes they can sing songs while they bake and another is concerned about the ingredients for the muffins.

In another panel, one of the characters complains about the meeting being "A lot of scientific jargon," while another one declares it boring, and says it's time to do some baking.

@laurabee1980 called out the magazine on Twitter, saying it was "an embarrassment" to the brand.

@LetToysBeToys @LEGO_Group Both my children love Lego, and this makes me want to run in the opposite direction. Sort out your magazines, this is an embarrassment to your brand. pic.twitter.com/ZPRjT2BlTZDecember 14, 2019

Plenty of people agreed with her too.

Horrifying. What century are these writers stuck in? Have they ever been in a room with researchers????!!!!December 18, 2019

While others suggested Lego might do well to hark back to its earlier messaging.

Remember this, @LEGO_Group ?Let's go back to these ads and content for children. pic.twitter.com/WGvje3SX7TDecember 18, 2019

Other Twitter users pointed out that perhaps the characters were saying they'd stick out like sore thumbs because they are children, and presumably these researchers are adults. But then the follow on 'let's dress up as bakers' plan doesn't seem to make much sense. Frankly, none of it seems particularly logical.

In response to complaints, a spokesperson for Lego said: "With this story, we were trying to show that girls have lots of different interests and passions including science and STEM but we appreciate that some of the language we used missed the mark this time and we apologise.

"We will certainly learn from this and do better in future."

We'll admit it, we've never paid a lot of attention before to Lego Friends magazine, but we'll be keeping an eye out in future to see if Lego does decide to do any further "research" on the matter.

In the meantime, if you're still into Lego (and we do love those bricks!), you can read more about the new Star Wars sets coming soon here.