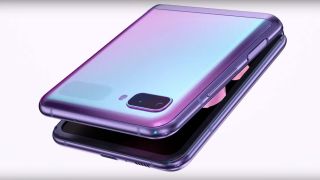 Based on what we saw at Unpacked, we've no doubt the Galaxy S20 will soon hold a very prominent position in our round up of the best camera phones, which we'll have more on soon. But for now, the focus of this article is very much on the Galaxy Z Flip...

First things first, it looks good. Seriously, when it comes to gadgets, this pocket-sized device's appearance is super-cool. While a smartphone clearly created in the 21st century, the Z Flip's unmistakable nod back to some the best flip phones of the early 2000s gives it a wonderfully nostalgic charm.

We weren't surprised to see the Z Flip's price tag placed significantly higher ($1,380/approx £1,300) than many other smartphones currently on the market. It's unique form factor is no doubt the driving force behind that decision. However, for such a high cost, the Z Flip needs to balance its style with a shedload of substance. And, on closer inspection, the latter is, initially, not something we're completely sold on.

Samsung's marketing director Rebecca Hirst introduced the device, saying: "With this phone, we have done the impossible, creating ultra-thin glass that folds." There's no question that overcoming such a huge design challenge is impressive. However Nilay Patel on Twitter was quick to point out the small print on the Z Flip's launch video, highlighting a maybe less than desirable result of the folding glass. Blink and you'll miss it in the tweet below, but just five seconds into the video, text appears stating users may notice a small crease at the centre of the main screen.

Now, this might just be us, but if we're shelling out well over a thousand dollars for a new phone, a crease anywhere on the screen, least of all the middle, is really not ideal. We obviously yet to see if this is actually the case, and if so, what impact it really has on the display, but it's a concern also shared by others...

I love the idea of a foldable phone, but literally any amount of screen crease is an instant “no” from me.February 10, 2020

During the Z Flip's unveiling, Hirst was also very keen to showcase the phone's outward-facing screen, which is visible when closed, and outward-facing camera, perfect for selfies. While we didn't see it up close, Hirst's demonstration made us wonder how a screen so small could be used to display anything that could actually be seen without holding it very close to your face.

Having said all that, we do really like the Z Flip's Flex Mode, which gives it an almost miniature laptop feel. In Flex Mode, the phone is half open, and can sit unaided with the screen effectively split in two. A novel feature for the user, but something app developers may need to consider if this device really takes off. Flex Mode also removes the need for a tripod, which could be a big plus for content creators (dependant on camera quality, of course).

Without actually getting our hands on the Galazy Z Flip, it's hard to say if its performance and functionality measures up to it's unique design. One thing's for sure, it certainly has the 'wow' factor, for now at least.

The Galaxy Z Flip will be released in the US and UK on Friday 14 February 2020. For full specs and purchasing information, visit the Samsung website. After a different Galaxy device? Here are the top models, at the very best prices, in your area: