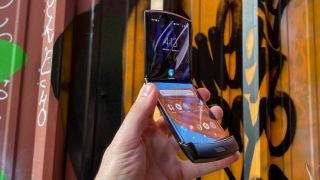 There are plenty of reasons to consider one of the best flip phones for your next phone. Flips phones have definitely come back into fashion, and some of the newest models are effectively small, powerful tablets that are ideal for sketching on the move, and fold up small enough to tuck into a pocket when not in use.

On the (ahem) flipside, a more basic flip phone that harks back to the flip phones of yester years could be a great choice, especially if you already have a powerful camera phone for work, but want something minimalist to help you avoid distractions, or put work behind you at the end of the day.

It might also be a good idea to invest in a secondary phone on top of one of the best smartphones if you don't want to be seen pulling out a high-end flagship handset in public. A rugged flip phone, which can survive the occasional knock and is less tempting to thieves, would do the job perfectly.

We've picked out the best flip phones you can buy right now, whatever your requirements and budget.

One of the coolest flip phones around is the Samsung Galaxy Z Flip. Its screen is 6.7-inches and folds beautifully in two, in a way that doesn't make you worry about its hinges. This feels like the flip phone of the future, a phone that you can balance neatly on a table or your lap while you talk to people, and which you can use as two separate displays or one big one. The camera is decent, the thin glass screen feels sturdy yet sleek, and there's even wireless charging. Overall, we think the Samsung Galaxy Z Flip is the best flip phone on the market, the only problem is, it'll cost you.

One of the best flip phones to replace your regular handset

The Motorola Razr 2019 is a spiritual successor to the hugely popular Razr V3, and blends the older phone's classic design with cutting edge technology. The new Razr's key selling point is its screen, which flips out to give you an extra wide 21:9 display that's well suited to creative work. Unlike the Galaxy Fold, below, there's no visible seam in the screen where it flexes, and the display is bright and crisp.

When you're done, fold it shut and you've got a compact, palm-sized block that can be tucked easily into a pocket. The hinge adds a little bulk, but the folding mechanism feels pleasant, and almost as satisfying as the snap of the old V3.

This isn't a phone you'd buy on the strength of its camera (check out our guide to the best camera phones if you're interested in mobile photography), but the Razr's 8MP rear camera is sufficient for capturing basic stills and videos.

Although it's not advertised as such, we like to think of the Samsung Galaxy Fold as a flip phone that hinges along the vertical rather than horizontal axis. Its design has a lot in common with the new Motorola Razr, but rather than extending to give you an ultra-wide display, the Fold opens to reveal a 7.5-inch mini tablet that's ideal for sketching with the Samsung S-Pen.

In its compressed form, the Galaxy Fold looks and works just like any 'candybar' smartphone (albeit an unusually chunky one). Its cover features a 4.6-inch display that's ideal for messaging and calls, and its narrow body means it's much easier to slide into a pocket than a Samsung Galaxy Note (for example).

Unfortunately, the Fold isn't without its problems. Its hinged screen is fragile, and although Samsung has made a lot of improvements since its disastrous early launch, when reviewers (many of whom had accidentally removed a vital protective layer thinking it was a piece of packaging) reported the phone breaking in days. You'll have to take care of the Fold, but when you're paying this much, that probably goes without saying.

The best flip phone for minimalists looking to declutter

Looking for a simple secondary phone? The Nokia 2720 Flip could be just the thing. Its sleek, minimalist design is faithful to Nokia's classic flip designs, and is far lighter and smaller than more feature-filled devices like those from Samsung and Razor.

The Nokia 2720 Flip uses Nokia's own KaiOS operating system rather than Android, which greatly limits your choice of apps, but that's no bad thing if you're looking for a minimalist flip phone that'll help you avoid distractions when you're working (or trying to get away from work).

But why choose the 2720 when other, older models are available more cheaply? The answer is simple: 4G LTE. You could pick up a five-year-old flip phone for very little, and it may serve you well, but the lack of 4G support will leave you struggling with slow data speeds, which could be a real pain if you need to stream video for work, or send big files. This phone gives you the best of both worlds: a sleek retro design with modern hardware where it counts.

The best flip phone for fans of the classic style

Before the Fold, there was the Folder. The Samsung Galaxy Folder 2 was released without fanfare back in 2016, and has largely been forgotten in the shadow of its flashier younger sibling. That's a shame, because it's still an excellent flip phone and more practical than the Fold in many ways.

Its design is a little more luxe than the Nokia 2720 above, and the fact that it runs a full version of Android means it could work well as either a primary or secondary phone. Again, it's a great choice if your design work takes you around the world, particularly because it's capable of holding two SIM cards plus a microSD memory card, so you can easily switch networks while overseas and avoid incurring roaming charges.

Without a flexible screen to worry about (the phone's lower portion contains a set of reassuringly tactile physical buttons), it's more likely to survive the rigours of daily use than the Fold, and with no screen on the outer shell it's less prone to scratches.

If you like the look of the Samsung Galaxy Folder 2, but are keen to stick with Verizon, the LG Exalt VN220 is well worth your time. Its clamshell design ensures the screen is always protected, and its durable hinge will survive many years of use.

The 5MP camera won't set the world on fire, but it's surprisingly good for a budget flip-phone, and sufficient for basic tasks. It's just a shame there's no flash. You do, however, get a generous 8GB storage for your stills and videos.

With hearing assistance, text-to-speech and large, clear buttons, the LG Exalt VN220 is also a strong choice if you find modern touchscreen smartphones tricky to use, or are buying a handset for a senior family member.

The best rugged flip phone is one tough customer

As its name suggests, the Samsung Rugby 4 can take a good kicking and keep on going. This super-tough little feature phone is dust and water resistant, so you don't need to worry about throwing it into a suitcase or it getting damaged if you're working on location.

This is a feature phone rather than a smartphone, so you won't have access to the full contents of the Google Play Store, but you do still benefit from GPS navigation, which is all but essential when you're working away from home. It can provide turn-by-turn directions, and even provide traffic updates.

The Rugby 4 is a superb flip phone to have in your corner when the going gets tough (or unusually dusty). It's cheap too, so if you do find a way to break it (or, more likely, it's stolen), it won't be the end of the world.

The best flip phone for seniors is full of thoughtful touches

A classic flip phone can be a great choice for older users, or anyone who finds slippery glass touchscreens awkward to use. The TTfone Lunar TT750 is specifically designed with seniors in mind, and has been thoughtfully designed to be as accessible as possible.

Its smooth, pebble-shaped chassis fits neatly and securely in the hand, and the included charging dock means there's no struggling to plug in tiny USB-C cables. It opens to reveal large, tactile buttons for easy dialling, plus a one-touch SOS button that can be set to call a relative in an emergency. Call volume is easy to adjust, and the dual screen is high contrast, with clear fonts.

The TTfone Lunar TT750 is only available in the UK and Europe, but if you're in the US, the Jitterbug Flip is very similar.