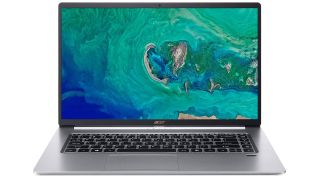 Black Friday has begun! And this Amazon lightning deal on a 15.6-inch Acer Swift 5 laptop is one of the best reductions you're likely to see during the frenzy of this weekend. With a whopping 40% off, it's knocked down from $1,399.99 to just $839.99! But you need to hurry as lightning deals don't stick around for long. We've even seen some of them sell out in as little as half an hour.

This ultra-thin and lightweight laptop boasts an 8th gen Intel Core i7 processor and  a super-fast wireless connection. The powerful machine has also got 16GB of memory and fingerprint technology, a 256 GB hard disk and Windows 10 Home. So much bang for your buck – especially with $560 off!

We're updating our Black Friday deals posts live to save you time searching for the best deals. Hubs like the best iPad deals, and Apple Pencil deals will have new bargains added throughout the weekend, so keep checking back.

Acer Swift 5 Ultra-Thin & Lightweight Laptop: $839.99 at Amazon
Save 40%: This impressive machine has a 15.6” FHD IPS Touch Display, 8th gen Intel Core i7-8565U, 16GB memory plus thoughtful touches like a backlit keyboard. This deal gives you a massive saving of $560 so it's worth getting in there quick!