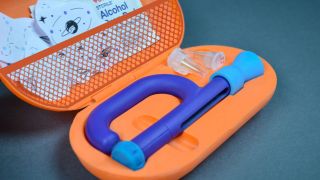 Inside the kit is an insulin pen that’s been ergonomically designed for a child's hand, and a set of playful, non-toxic temporary tattoos that help children remember where they’ve already injected insulin.

According to statistics portal Statista, there were 596,000 children with diabetes worldwide in 2017, with 96,000 diagnosed that year.

“After observing Thomás’ routine, I realised how tedious the process of injecting insulin into the body is. It’s hard for him to use a regular insulin pen because of his little hands, and it’s easy for him to forget where he last injected insulin.”

Thomy helps diabetic children have fun while managing their process. Here’s how it works: the temporary tattoos provide a visual indication of where a child has previously injected. The black ink remains on the skin, while a coloured dot is removed with an alcohol pad before each injection – ensuring that the area is disinfected.

“After a couple of days, the tattoo will no longer have colour, indicating it’s time to choose another design and rotate to another injection site,” says Souza. This is important, because Souza’s research showed that the injection site must be alternated to avoid lumps of fat developing.

Meanwhile, the insulin pen is designed to fit in a child’s hand, and help reduce anxiety associated with needles. It’s fun, and versatile – it can be held in different ways – and, uniquely, the release dial is covered in thermochromic plastic, so it changes colour with temperature. This helps encourage children to keep it in until the full dose has been administered.

Souza knew she had achieved her goal when she received a photo of one of Thomás’ brothers – who isn't diabetic – wearing the tattoos too.

“Despite the fact that early-age diabetes diagnoses are increasing, there are rarely any diabetic products designed specifically for children,” explains Souza.

“Being diagnosed with diabetes forces a child to grow up. They have to learn to inject themselves, cope with a fear of needles, and add and subtract points to figure out what to eat. Not to mention they must forego candy. Thomy gives diabetic children something to look forward to when taking care of their condition.”

The project, which was undertaken as part of Souza’s studies at Parsons School of Design, was a national finalist in the James Dyson Award 2017.