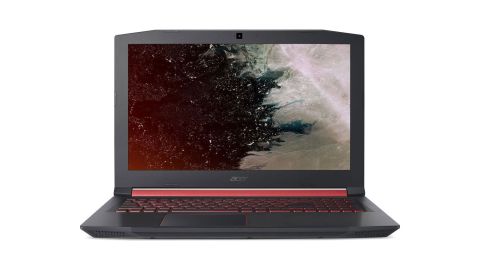 AMD's hardware delivers enough computing ability to handle most mainstream work tasks, and the Nitro 5 has good versatility elsewhere – but its low price means that compromises are made.

The Acer Nitro 5 (NH.Q3REK.007) is a gaming laptop by trade, which makes it an unusual option for creative work. So how does it fare against other laptops for graphic design? Well, there's a fair bit of method to this machine's madness. While it may have been designed for blasting through Fortnite or FIFA, the underlying hardware delivers a solid processor and a discrete graphics chip alongside a full HD screen for a reasonable price.

That's the sort of hardware that'll handle photo editing, some video work and content creation without the prices associated with high-end workstations. The Acer Nitro 5 might be a sensible bargain – but it could also be a false economy if too many corners have been cut.

The Nitro 5 is more eye-catching than most laptops we usually see, which comes as no surprise considering it's a gaming machine. The lid is made from brushed aluminium and the hinge is finished with a dark red shade. That red theme continues to the keyboard and trackpad: the buttons have a red backlight, while the pad is ringed with the same colour.

The gaming heritage means this machine stands out, but it's also a little immature compared to some rivals. At this price you'll get Dell and HP machines that look darker and smarter, with no extraneous colours.

The Nitro 5 isn't the slimmest or lightest either – it weighs 2.7kg and is 27mm thick at its chunkiest point. Those figures are a bit higher than normal for a sub-£1000 notebook. However, it must also be noted that spending a little more cash will open the door to machines that are slimmer, lighter and better-looking than the Nitro.

The Surface Book 2, for instance, costs at least £1099 – and for that money you'll get a mid-range CPU with no graphics core. To get discrete graphics, you'll have to spend nearer to £2,000.

The Acer's build quality doesn't match the sort of strength that we routinely see on pricier portables, but it's not disastrous – the hinge could be smoother, and there's a tad too much movement in the material on the underside. Still, these are not terminal problems, especially at this price. The Acer isn't so thick or heavy that you can't carry it around in a bag easily – and it's easy enough to use a sleeve to protect the exterior.

Two plastic panels on the base remove for easy access to the hard disk and memory slots. That's good for replacing or upgrading key components. However, there's no easy way to access the SSD or the cooling gear.

Exterior versatility isn't as good. You get single USB 3.1 Type-A and Type-C connectors, but the other two USB ports use the older 3.0 and 2.0 protocols. There's an HDMI output, but no DisplayPort, and you only get one headphone jack. Unsurprisingly, there's no fingerprint reader.

The Nitro's processing grunt comes from an AMD Ryzen 5 2500U (a newer chip from AMD's second-generation Zen architecture). The 2500U sits right in the middle of AMD's mobile range. It's got four cores that use multi-threading to address eight threads, which is important for tough, multi-threaded applications as well as nimble switching between different applications.

The 2500U is clocked to a middling base speed of 2GHz, but this rises to 3.6GHz using dynamic boosting. The AMD chip's nearest Intel equivalent is the Core i5-8300H. It's available in other variations of the Nitro 5, and it's popping up in mid-range notebooks all over the market. The Intel chip also has four cores that can address eight threads, and its 2.3GHz base speed and 4GHz Turbo both outpace the AMD hardware.

The Ryzen 5 2500U returned single- and multi-core results of 3,564 and 9,864 in Geekbench, which evaluates CPU performance using real-world tasks. It followed up with a CPU score of 661cb in the graphically-intensive Cinebench test. Those scores are behind the Core i5-8300H. The Geekbench multi-core result is around 5,000 points slower, while the gap is closer in the other two benchmarks.

Still, they're decent mid-range results, and application-specific tools show that Ryzen has plenty of ability. In a GIMP-based image-editing test which relies heavily on single-threaded speed the 2500U scored 31,793 points. That's more than half the speed on offer from Intel's most powerful consumer desktop chips – which means you've got a solid amount of power for getting photo-based work done on the road.

Similarly, in a Handbrake-based video benchmark, the 2500U scored 151,585 points. That score offers just under half of the pace of a top-tier desktop chip, but it still indicates that this machine has enough grunt to handle more basic video tasks.

In the PC Mark 8 Home benchmark the Acer laptop scored 3,855 points, a result that'll beat many Core i5-8300H machines, especially with weaker graphics. Given that the PC Mark 8 Home test tackles tasks like writing, web browsing and photo-editing, that bodes well for mainstream work software. Ryzen may sometimes fall behind the Core, but both chips beat the parts used in pricier and slimmer machines – even though they're often touted as workhorses.

The Surface Book 2 is available with a Core i5-7300U or a Core i7-8650U. The 'U' suffix on an Intel chip means it's a low-power chip, and the specifications prove it, with only two cores and lower speeds. The i7-8650U has four multi-threaded cores, but a far lower power ceiling.

It's an admittedly confusing landscape. However, we can draw firm conclusions. The Ryzen 5 2500U is fast, but it can't quite beat the Core i5-8300H. However, both chips are noticeably quicker than the low-power parts that are routinely used in slimmer, lighter tablets and convertibles that are touted as work machines. That's exactly what we'd expect from a proper laptop, because there's more room in the design for a beefier processor. But it's nice to have it confirmed.

However, the RX 560X is better than Intel's integrated UHD 620 chipset. It's four frames quicker in Cinebench, and Intel's chip couldn't get beyond 1,000 points in Fire Strike. Elsewhere, you get a solid SATA-based SSD, a hard disk and 8GB of memory – a solid specification.

Don't expect longevity, though. As this is a gaming laptop, battery life was never going to be good – it lasted for almost four hours in an application test, but that was it. If you really push the CPU and GPU, expect that time to halve.

The Nitro 5 has a 1080p 15.6in IPS display. The 1080p native resolution provides enough screen real estate for most tasks – and you'd have to double the Acer's price to get a meaningful resolution jump.

The brightness level of 272cd per square metre is enough to handle bright office lights, and the black measurement of 0.26cd per square metre is decent; black shades will appear suitably deep and inky. Those figures combine for a measured contrast ratio of 1,046:1. That's high enough to ensure vibrancy throughout and to deliver solid variation between similar shades.

Delve into colours, though, and the Acer underwhelms. Its colour temperature of 6,767K is fine – and means that the screen doesn't appear oversaturated or washed out – but the Delta E of 5.08 is poor, and means that colours aren't accurate.

The screen is one big area of compromise on this machine. It doesn't have the gamut coverage or the colour accuracy to handle any photo, video or design work where accuracy is the most important attribute. That means it's only good enough for more casual photo or video jobs – or work that you can complete on a better screen at a later date.

The Acer Nitro 5 has a conventional laptop keyboard. The buttons are quiet and have a reasonable amount of travel. They're comfortable and consistent, with ample speed when pressed down. Those attributes are good for typing – we were able to hammer through long documents with an impressive level of comfort.

The Acer's keyboard isn't all good news, however. The base panel is soft, which could prove irritating if you prefer a firmer and snappier typing action. The layout is a little strange, too: the left and right cursor keys are too narrow, and the Return and left-shift keys have to share space with other buttons.

The trackpad is mediocre. The two built-in buttons are soft and push down too far when compared to a normal desktop mouse. That's irritating if you're used to a faster and shallower clicking action.

One of the advantages of the Nitro 5 is the variety of specifications – and prices – that are available. If you want more CPU power, a version with an Intel Core i7 processor will set you back about £900. A cheaper model with a Core i5 processor – but no SSD – costs approximately £649. Retaining the CPU and adding an SSD and better graphics ups the price to £799.

While it's impressive that Acer releases many different models, it's worth keeping a close eye on retailers if you're interested in buying. Prices often vary significantly, and models come in and out of stock with regularity.

Every laptop that costs less than £1,000 involves compromise. On the Nitro 5, Acer has made compromises when it comes to screen quality and design. The screen has a fine resolution and good contrast. Viewing angles are solid. However, the screen doesn't display many colours – and they're not particularly accurate. That means the Nitro's panel is only capable of handling more casual photo and video work. And while the Nitro 5 doesn't look bad, its gaming design is dated and it's certainly possible to buy slimmer and lighter laptops at this price.

The processor and graphics offer good power for a wide range of tasks, from multitasking to photo-editing – easily more grunt than slimmer and more stylish machines. The keyboard is fine, and the port selection and internal access isn't bad. The price is right, too: half as much as you'll pay for a prestige portable elsewhere.

If you can cope with those compromises, the Acer Nitro 5 is a reasonable and affordable alternative to slim machines and proper workstations. Ignore the gaming branding and be aware of this machine's downsides and it'll deliver a solid amount of computing power for a surprisingly low price.

AMD's hardware delivers enough computing ability to handle most mainstream work tasks, and the Nitro 5 has good versatility elsewhere – but its low price means that compromises are made.