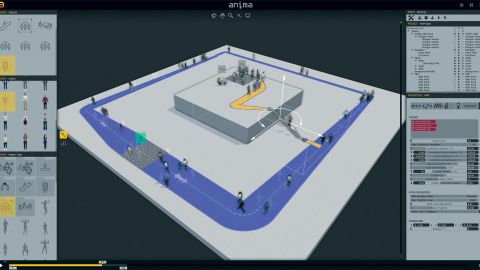 This consolidated update makes it a lot easier to move detailed rigged models, pose actors and populate large scenes. And for the asking price, it's an absolute steal.

Adding people to animations in 3D art, can be tedious, especially if it’s only to add life to an architectural walkthrough. With the latest release of Anima, AXYZ Design offers a standalone solution for mass people creation for Cinema 4D and 3ds Max.

As a massive fan of the first release of Anima, it is great to see that AXYZ has consolidated the feature set and has made Anima a lot less fiddly to use. The methodology of using Amima is pretty simple, load in geometry (.obj, .3ds, .dae, .fbx and .lwo formats are supported) from a 3D scene into Anima’s workspace, draw the paths that the people are to walk on, drop on some ‘actors’ (rigged people models, Anima comes with 24 rigged 3D adult models), press play and watch the actors walk and interact on the chosen path.

Then using the 3ds Max or Cinema 4D plug-ins place the highly detailed model into your scene. While performance can be slow in the host application, even when detail levels are reduced (we tested with Cinema 4D) the actors in the actual Anima software work well, giving you a good sense of the actions in the scene. The actors aren’t limited to walking, they can be seated in groups or stood congregated looking at user-specific points, for example.

If the scene contains walkways or escalators, Anima handles that with ease, and the new control paradigm makes linking escalators to existing paths straightforward. If the base model has undulations, stairs or ramps, Anima’s basic path setup handles them pretty well.

The people models that come with Anima are really well detailed and are fully posable using the new figure interface. In this interface a huge range of options from hair colour to clothes type can be modified, and there’s a range of motion options that can be dragged and dropped onto the actor. Anima can import models from the AXYZ library available online or your own figures, plus your own motion data.

Populating large scenes is easy with the crowd options, and while Anima does have a unique UI, once the basics are learned there is a surprising amount of depth available. Another great new feature are traffic lights which can hold the actors for a set time and let them walk when needed, even paused the actors show some movement.

As this is a complete ground up upgrade, some of the export options aren’t currently available such as file export to alembic or .fbx, but they are coming. At the price Anima is an absolute steal, and it does a great job of providing a huge range of options with the stock setup and actor library for near enough any scenario that needs to be populated.

This article was originally published in 3D World magazine issue 211. Buy it here.

This consolidated update makes it a lot easier to move detailed rigged models, pose actors and populate large scenes. And for the asking price, it's an absolute steal.