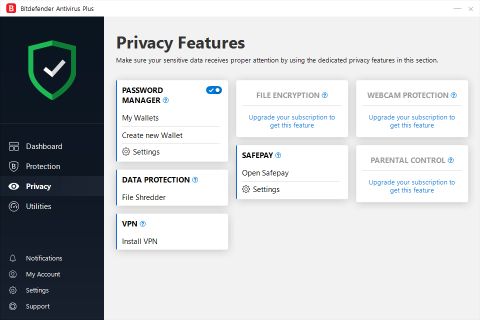 Bitdefender’s antivirus package performs well for both accuracy and reliability, with enhancements for dealing with ransomware.

Also integrated is a Hotspot Shield-powered VPN, but it's a restricted basic edition that doesn't enable selection of your location. Furthermore, it has a paltry 200 MB daily of data transfer allowance which is merely enough for email and really lightweight browsing, and while ok to have as a backup for an unlimited VPN, overall it is of minimal use.

Ransomware remediation was recently added to the current version and it provides an additional layer of protection by monitoring for the behaviour of ransomware rather than only known signatures of ransomware on file. In addition, it backs up targeted files concomitantly while the malicious software is halted. Also, no worries if the regular antivirus engine takes some seconds to destroy the ransomware, as Bitdefender actually has the power to revive files that were encrypted.

Also of note is that the novel Network Threat interference. This works to plug the holes that malware uses to take advantage of the vulnerabilities on your device to launch further widespread attacks.

For these appreciate the “Set it and forget it” approach, Bitdefender's Autopilot system delivers useful, intelligent recommendations that optimize the protection to support the individual’s pattern of usage. A dashboard sports a current clean interface on the Windows build to make use even easier.

Another option is the even more powerful, Bitdefender Total Security 2019 which adds a firewall, spam filter, webcam protection, parental controls and more features, with versions for the platforms of Windows, Mac, Android and iOS. The one-year license can cover up to 5 devices, and runs $44.99 (£34.23) for the first year with a special discount.

The first step to getting Antivirus Plus 2019 up and running is the creation of a free Bitdefender account. This requires that your email address is provided before the program is downloaded. These days, different organizations do usually need your email address, and having this account will bring the power to watch your device’s security status on the Bitdefender's internet console.

We our email address registered, we next downloaded Bitdefender Antivirus and commenced the installation on our system. Setup ran quite well without any issues, and next we scanned our laptop, enabling us to start malware free. Along the way, Bitdefender browser extensions get installed, and there was negligible problem.

When first launched, Antivirus plus helpfully starts with a straightforward tour, that points out vital items of the straightforward to understand interface. Whereas skilled users hardly would like this, it's still useful obtainable for newer users.The first step to obtaining Antivirus and 2019 up and running is the creation of a free Bitdefender account. This requires that your email address is provided before the program is downloaded. These days, different organisations do usually need your email address, and having this account will bring the power to watch your device’s security status on the Bitdefender's internet console.

We our email address registered, we next downloaded Bitdefender Antivirus and commenced the installation. Setup ran quite without issue, and next scans our laptop thus we are able to begin malware free. Along the way browser extensions get installed, and again there was no problem.

We enjoyed the choice to vary the console, thereby providing the user a chance to exchange the default choices with something they're more likely to utilise. As an example, those not intrigued by the VPN, can in a passing few clicks of the mouse modify it out for an assortment of alternatives, such as a button to launch the system scan, the Word manager, or the file device.

Generally speaking, the Antivirus Plus 2019 interface is a significant highlight of the program, hanging an honest balance between simplicity for novice users, and lots of advanced choices for power users. It furnishes neophytes with easy accessibility to the foremost necessary choices, while accommodating advanced users with plenty of setup alternatives and available granular changes.

Bitdefender Antivirus Plus 2019 has support for different sweep modes: Quick Scan reviews the highly contaminated zones and is snappy, System Scan takes a gander at everything with the exception of that it takes longer, and Explorer combination checks objects from Explorer's correct snap menu. There's similarly a bootable salvage mode for removal of the most stubborn malware risks.

The choice to Manage Scans is for creating new scan types to test specific files and folders. You're able to manage what the scan does – to look for rootkits, nevertheless skip 'possibly unwanted applications,' for instance – and there are further selections for programming of automatic scans. While this doesn't compete with the even higher configurability of Avast, there's still lots of fine control options to please the more advanced users.

We found the scanning speeds to be plenty fast. A Quick Scan took a speedy 15-30 seconds on our test PC, but going to the full system scan increased that quite a bit to a lengthy 135 minutes as it examined a hefty 335 GB of documents for the first time. By the second sweep, that time dropped to only 43 minutes, and and to even an even shorter 30 minutes for the third scan.

Bitdefender also integrates an increasingly crucial password manager which they dub Wallet. This can then organise and keep ready important personal info such as website credentials, credit card info, wireless network logins, application logins and license keys, and email server credentials. It can also keep secure such personal details for your contacts such as their names, dates of birth, addresses, emails, and phone numbers.

There are also password manager extensions from Bitdefender for the mainstream browsers including Chrome, Firefox and Internet Explorer. This extension is just fine at the essentials for a site login like username and password. On the other hand, we quickly found the limits of it as it strained itself for the completion of more complicated form fields beyond the more basic. Clearly it is not capable of replacing dedicated password management software such as LastPass. For those that don't have such software already installed and in use, Bitdefender’s solution would be helpful. Additionally, there is also a Wallet extension that automatically installed into our Chrome browser.

Moving on, an additional element is Bitdefender's Safepay. This is an ultra secure browser designed to secure web based banking and other sensitive, financial exchanges. We tested it, and attempted to crack it by utilising both screen capture devices and keyloggers. Despite our best efforts, we can declare it 100% secure  in our testing as none of our programs we tried could record anything that was done in the Safepay browser.

Many systems can easily end up out of date without all the latest updates and patches installed. The Bitdefender Vulnerability Scanner assists in keeping the entire system updated, performing essential checks as it looks for missing application updates, Windows patches, weak passwords and multiple other potential system deficits. Quite frankly, this feature is hardly unique, but running it on occasion could certainly assist in keeping your system less vulnerable.

Finally, File Shredder is another useful feature that can totally delete chosen documents and folders so totally, that there is no way for them to be recovered. It worked quite well for us, and is a convenience for destroying delicate records. We found it too limiting for the experts as there is no granular control over the specific shredding algorithm used to delete the file. While this may be plenty adequate for a novice, power users are more than likely to be frustrated by these omissions, and will turn to dedicated file shredding software that offers considerably more options.

Bitdefender products regularly top the ratings from the top tier testing labs. Specifically, the AV-Comparatives' February to June 2018 Real-World Protection report gives insight on the results of five individual tests, and Bitdefender performed well on all of them. This product blocks a high 99.8% of presented threats, placing it out of 18 competitors in an impressive 3rd place for protection. In testing by another lab, AV-Test, on their Windows 10 analysis for April 2018 had Bitdefender blocking a seriously impressive 100% of malware thrown at it, which is akin to pitching a perfect game in baseball.

Professional analysis’ aside, we decided to independently conduct further testing for confirmation of these spectacular results. This began by checking Bitdefender's malicious website filtering against some newly found hazardous links. Antivirus Plus blocked 84% of them, a result better than most competitors. However, this is certainly a challenging area for consistent evaluation due to how dynamic it is, with results literally changing daily.

Another malware area that Bitdefender claims expertise in is its anti-ransomware functionality, so we put the program to the test once again. First off, we pitted Bitdefender against our known ransomware sample malware. Thank goodness, Antivirus Plus immediately controlled the ransomware before our system’s files could be encrypted or any other damage done.

We then ramped up the level of difficulty with our own custom ransomware simulator. As it was our own creation, we could guarantee that Bitdefender had no experience with this specific malware. We allowed Antivirus Plus 2019 to run as well as the test ransomware, and patiently watch, but then shortly thereafter it totally stopped the malware from continuing. Bitdefender also notably went a step beyond to decrypt any of the ransomware encrypted files on our computer.

Unfortunately, Bitdefender did not completely clean up the entire system, as the ransomware executable was still on the system, and not deleted. Furthermore, the encrypted files ended up staying alongside each original file; we would have preferred if both the ransomware and the encrypted files were removed from the system by our antivirus solution. But in the big picture of things, Antivirus Plus 2019 successfully blocked both the known, and also the never-seen-before ransomware threats, and equally impressively without the loss of any files.

Bitdefender Antivirus Pro 2019 provides all around antivirus protection for the entire plethora of malware, and also neutralises ransomware. When tested by top tier antivirus labs, and in our own testing, it performed well, keeping both the already known, and newly discovered threats from bringing down a user’s computer system. This easily earns this product a spot on the recommended shortlist for securing your PC.

Bitdefender’s antivirus package performs well for both accuracy and reliability, with enhancements for dealing with ransomware.

Software
Get Weekly Tips and Inspiration