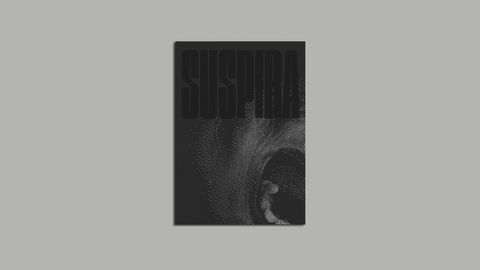 A fearless, feminine takeover that breathes new life into the horror genre. Head-spinningly strange and exquisitely designed. A dark narcotic.

Suspira is a dark jewel of demonic delights from Dreadful Press, the independent publisher behind controversial witchcraft magazine Sabat. Investigating monsters of the invisible (imagined) and visible (real) worlds, this debut issue feels as if it was written and designed at night, in a fever dream of Jungian darkness. There's a macabre yet beautiful cabinet of curiosities hidden behind its blacker-than-black cover.

Despite an obvious affection for B-movie exploitation flicks ("Enter if you dare..." the website warns), Suspira is no blood-junkie gorefest, but rather an esoteric collection of dispatches from the borderlands of the unconscious. For editor and creative director Valentina Egoavil Medina, "Fear is what we don’t know… the universal monster that is the reflection in the mirror."

The shadow self looms large: mental illness as demonic possession is explored in Aviv Grimm’s intimate discussion of depression and sleep paralysis (This Unrest) and Susannah Russell’s essay on the representation of vampires and werewolves (Idols Cast In Our Likeness) dissects them to extract their all too human DNA. Elsewhere, Medina’s interview with Rue Morgue’s Andrea Subissati (Speaking of Monsters) examines the cinematic depiction of monsters from Dracula to The Shape Of Water, and finds them "100 per cent socially constructed … a reflection of our own anxieties and apprehensions."

"Kiss me and I'll claw you to death"

What makes Suspira so refreshingly contemporary is its resolutely female perspective and determination to "dissect sinister subjects through a feminine lens." Well-worn male tropes are revitalised by Suspira’s female-centric agenda, which excels at making the familiar unfamiliar.

"We wanted to erase the misconception that horror as a genre and as an industry is predominantly male," Medina explains. "To approach the genre with a sensitivity that it hasn't necessarily been granted in the past, partly due to a desire to please primarily a male audience."

A critical study of the exposed pathological behaviour of men could hardly be more timely. In what Medina describes as, "this moment of monstrous men," Alexandra Furssedonn-Howard’s essay –  The Monstrous Feminine – calls out mythological subjugations of women as thinly disguised reflections of men’s timeless fear of castrating woman, possessed by dark arts and exhibiting terrifying sexuality.

“If (women) do not work within the patriarchy and do what is expected of them, they become the stuff of horror in the eyes of men,” she says. In lesser hands, Furssedonn-Howard’s piece might be dismissed as polemical, but her writing is so compelling, the only possible response is one of uncomfortable recognition.

Fascinating as Furssedonn-Howard’s essay is, what raises it to the transcendent is the choice of accompanying photographs by French artist Patrick Jannin . Rather than simply illustrating the piece, Jannin’s disturbing stills of animal-masked sub/dom sex rituals complicate and subvert it, triggering a queasy confusion in the reader. This ambiguity is a defining characteristic of the whole magazine, which endlessly encourages complexity over dogma, asking questions rather than answering them.

While Suspira’s dark subject matter might be divisive, the designs conjured up by London-based Studio FAX’s Dario Gracceva and Aldo D’Angelo are impossible to resist. The magazine looks wonderful, with endlessly inventive and ambitious treatments.

"We were able to meet up regularly to discuss and brainstorm ideas,” Madina told us, “there was no single way of approaching the designs, instead, we focused on translating the written content into a visual context, deconstructing each topic and reconstructing it visually.”

From sumptuous photography to pseudo-biblical type-only layouts – all deployed with a delicious variety of paper stocks and special inks –  Suspira is perfectly paced, every turn of the page a step into the unknown. Slogan-satirising soundbytes of disruptive typography – YOU HAVE A THOUSAND THRILLS! – co-exist with medical diagrams of conjoined fetuses, the pages flickering past in a sensory overload of fearless WTF antagonism and analyst-couch angst.

From beginning to end, the design refuses to settle into a recognisable template and that such an varied collection of treatments should still coalesce into a unified identity is testament to Studio Fax’s own dark arts.

Prospective readers should be warned: Suspira never forgets its foremost duty as a horror title to be, well, horrifying. Neal Auch's  macro photography of an unidentifiable animal (post-mortem?) are likely to freeze you in a reluctant gaze, whilst reproductions of Horacio Quiroz’s surreal artwork exploring the "boundaries and tensions between the beautiful and the grotesque" simmer with malevolence.

But horror, like sex, is a deeply subjective realm, each individual responding (or not) according to their own pathology. The magazine’s title, although in part a nod towards Italian horror director Dario Argento’s Suspira, was primarily chosen due to Medina’s emotional attachment to the Spanish word suspirar: to sigh.

“You can sigh from relief, sadness, arousal, infatuation and even fear,” she explains, “and in a way I wanted the magazine to be able to evoke all of those feelings, luring out a sigh here and there.”

Her magazine more than meets these objectives, with intelligence (and chills) to spare. And while it’s an unfortunate reality that female voices need to be expressed more often and louder to be heard above the male status quo, Susipra’s stunning execution proves how vital and exhilarating this experience can be.

A fearless, feminine takeover that breathes new life into the horror genre. Head-spinningly strange and exquisitely designed. A dark narcotic.