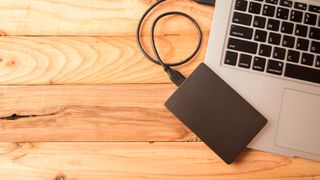 Jump straight to the section you want with these quick links:

The best external hard drives are fast, dependable and easy to use. They're usually affordable too, and of course, portable.

When choosing the best external hard drive for you, your main consideration should be storage capacity: around 500GB will suit most people, though it is of course cheaper to buy smaller capacities. To be on the safe side, you can also get larger ones at 1TB or greater – particularly useful if you need to store lots of video, or large Raw files.

Also consider speed, portability, price and connectivity – you’ll want to ensure your new external hard drive has the right connection port for your device. The first generation rectangular USB-A ports are slowly being superseded by the newer, smaller reversible USB-C ports. These are now found on all modern PCs and Macs.

HDD vs SSD: which is best?

There are two types of external hard drive: hard disk drives (HDD, also known as mechanical or traditional hard drives) or solid state drives (SSD). An SSD is faster, lighter and less power-hungry, whereas an HDD drive will be cheaper and slower than an SSD. HDDs are also good for storing lots of data as they often have a high capacity.

So, if you want to store huge amounts of data while keeping prices low, a HDD is the way to go. But if speed is your top priority – for example, if you move a lot of large files, or want to run programs off the drive – then choose an SSD. Or, you can always use a smaller SSD for files that you need to access or move around often, and then store the other data that you use less often on a higher capacity HDD.

Best external hard drives and SSDs for Mac and PC

The overall best external hard drive for Mac or PC

When it comes to the best external hard drives, look no further than the Western Digital My Passport range. This is the latest model to have launched, coming in sizes from 1TB to 4TB. It features cloud storage and 256-AES encryption, along with WD's own backup software.

It also offers top data transfer speeds. And while it doesn't quite offer a similar speed to solid state drive devices, the Western Digital My Passport range hits a brilliant balance between high storage capacities and quick file transfers without knocking the price way up.

The Samsung T5 SSD is a great performing storage device, reaching speeds up to 550 MB/sec, making the most of the USB 3.1 specification. It plugs directly into PCs and Macs with either a newer USB-C port or USB-A, is roughly the size of a matchbox and being a flash storage device, contains no moving parts, so can survive being dropped.

External SSDs may cost considerably more than hard disks, but the extra money and faster speeds go a long way. You’ll be able to easily load edit and save 4K video directly on the T5, which can be very slow with a USB hard disk, you can install applications onto it, or even run an entire alternative operating system off it at full speed, if you’re so inclined.

The downside is the pricing. SSDs give you less capacity for more money, so we don’t recommend the T5 for backup. It’s better to have a bigger hard disk for that and use the T5 in more specialised situations that need all that lovely performance.

G-Technology has long been a favourite of Mac creative professionals, and no small part of this is the clever use of silver aluminium that perfectly matches Apple's iMac casing, keeping desktop areas with a uniform appearance.

The latest incarnation of its G-RAID dual hard disk Thunderbolt product isn’t just a smart performer, capable of 440 MB/sec transfer rates in RAID 0, which is pretty incredible for hard disks, but it also gives you a few extras.

There's an HDMI 2.2 port on the back, which routes a video signal for an external display over the G-RAID’s Thunderbolt 3 cable, which has plenty of bandwidth to spare even with the hard disk going at full speed. It also has a USB-C port to connect to Macs or PCs that lack Thunderbolt.

Expect to pay a small fortune for the largest capacities, but thanks to the easy drive removal system, you could always buy a cheaper, lower capacity G-RAID and upgrade it with off-the-shelf hard disks yourself.

If you want to make use of your Thunderbolt port, then this Buffalo MiniStation Thunderbolt is a great option, as it provides twice the speeds of standard USB 3.0 drives. It's also not especially expensive compared to other Thunderbolt drives. This is mainly down to the fact that it's a traditional hard drive, not an SSD, which means it's not quite as fast as it could be – though it will still give you an upgrade to your transfer speeds.

Helpfully, the Buffalo MiniStation Thunderbolt also comes with a USB 3.0 port for connecting to computers that don't have a Thunderbolt port.

The LaCie Porsche Design is one of the best external hard drives for Macs on sale today, and comes with both USB Type-C to Type-A and USB Type-C to Type-C connectors, making it a versatile way to expand the storage space of your Mac, regardless of what ports it has. This is also one of the most stylishly-designed external hard drives on this list, and it comes with a large 4TB capacity (with other sizes available as well), and it performs brilliantly.

The Adata SD700 will suit those looking for a rugged storage device that can provide ample capacity without costing too much. It performs superbly well and remains the only SSD we’ve seen that's IP68 rated, which means it can withstand dust, dirt and sand and are water resistant for up to 30 minutes.

Thanks to the solid state drive that resides in this external hard drive, it's a lot faster than external drives that use traditional spinning hard drives – so you're getting great transfer speeds as well as rugged protection.

It also comes in capacities up to 1TB, so you don't have to worry about missing out on storage space just because it uses an SSD. This Adata drive really does hit all the right notes.

The best high capacity external drive for your Mac or PC

If you're looking for the absolute largest capacity external USB hard drive, then the WD My Book Duo Is the one to get, as it now goes all the way to a massive 28TB.

If you don't mind sacrificing some of the ample storage space you can set the drives up in a RAID 1 array, so you have file backups of your files should one of the drives die. This is an excellent feature if you're going to use this device to back up irreplaceable data, such as your creative work, as it adds a level of protection in case things go wrong.

It provides two additional USB ports on the rear, so you can easily insert flash sticks. The device has 256-bit AES hardware encryption, and automatic backup software (WD SmartWare Pro).

It's also worth noting that the enclosure used is fully serviceable and that WD ships the drive already pre-formatted for Windows users (NTFS), so you'll want to reformat it to work with your Mac.

This rugged design is great for storage on the move

Lacie’s rugged hard disk series is instantly recognisable from its orange casing, which is a rubber enclosure that keeps the disk safe from even medium-height drops up to 1.2m, along with your precious data.

According to Lacie it can apparently withstand the pressure of a one-ton car, and is resistant to rain. That makes it a great choice for content creation when you’re out and about, whether you’re participating in daredevil sports, travelling the world, just a bit paranoid or simply clumsy.

If you prefer your storage to be integrated, it is possible to upgrade to the internal hard drive of your desktop PC or laptop. It certainly isn’t easy though, and Apple has made sure it's pretty much impossible to replace those drives in their devices yourself.

Cloud storage is another option, allowing you to store your files online, enabling you to access them from pretty much any internet-connected device.