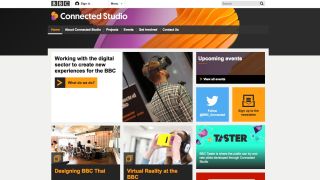 Think of the quandary: you’re an established public service broadcaster with significant digital real estate, and product teams delivering and maintaining a backlog of requirements. How do you seek to move past those product team innovations, and push bigger changes that look beyond the here and now?

Step in Connected Studio, a partnership between BBC R&D and Marketing & Audiences that has enabled the organisation to navigate the tricky waters of idea generation. Since its launch in 2012, the team has worked with the creative industry to help the BBC advance its innovation thinking through building and testing new concepts.

The process starts by the Connected Studio team highlighting where the challenges are: those steps that will advance a particular area of the BBC, or offer something new. You need a brief, something that articulates the challenge you’re looking to address, with enough of a steer to get the creative community involved.

We realised we needed a well thought-through plan for addressing Intellectual Property when working with the external community. Nobody likes to feel exploited, especially when it comes to giving up ideas, so we provide a simple contracted premise: you come up with the idea, it’s yours! Just give the BBC an option period to decide if it’s something it wants; if not, you’re free to take it and commercialise it elsewhere. Development doesn’t go unrewarded either – teams that reach the shortlist have their time and effort covered.

Establishing the right environment to investigate these briefed challenges is important too. In order to bring people face-to-face with the BBC, we have staged over 130 events across all levels of development, along with online submission. These are peppered with the right amount of support, insight and BBC expertise to help the ideas get off the ground.

All this helps us get a longlist of ideas down to a handful per brief that make it to the piloting stage. This is the period where ideas are funded to be developed; not in isolation, but again with the right mix of support to help shape the project.

We pilot ideas by developing them to the stage where they can be tested in UX sessions. The audience element is key here. When you’re coming up with new concepts, you need to get their time as soon as possible. Exposure to the audience is built into each stage of the initiative, from events where the ideas are being worked up, through to testing the ideas once they’ve reached pilot stage. Without the audience’s voice in the mix, you’ll never know what you’re making is right.

We then need to get these ideas out into the wild. Step into the breach BBC Taster. Taster was created to address those challenging times when we had no space to show the world all these new, experimental ideas – not only the technical innovations from the Connected Studio, but experiments from internal BBC teams that would have otherwise remained behind closed doors.

Taster presents a method for the audience to rate their appreciation of the pilot they’ve just interacted with in a light survey supported by a rigorous backend of analytics. The survey completion rate is 78 per cent, far outstripping the industry average of 17 per cent.

Since its launch 18 months ago, Taster has introduced a new angle of connection between the BBC and its audience by giving the public the opportunity to peer behind the curtain and try out what the BBC is working on. Most importantly, they can now leave their mark through feedback, to help the BBC shape future services.

In four years, Connected Studio and Taster have established the BBC’s route to challenge, explore and iterate innovation: failing fast and (importantly) succeeding faster, whilst learning and sharing those insights across the BBC.

We are also looking to build upon Taster’s success through partnering; allowing other organisations to share access to the platform with their own pilot projects. All of this has placed the BBC in the heart of collaborative innovation, allowing sharing and partnering to take the front seat.

This article was originally featured in net magazine issue 284; buy it here