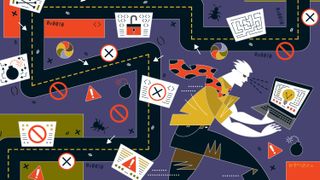 SuperFriendly director Dan Mall will be sharing his pro tips on how to stay relevant as a web designer at Generate New York 2018. Get your ticket now.

For those of you with less than five years’ experience in web development, it’s likely you’re still finding your feet in regards to language features, frameworks, architecture and best practices. And although you may start each site with the best intentions, by the end, chances are all you want is for the thing to work well enough that you get paid.

I’ve spent the past few years rescuing a variety of well-known brands’ sites that in theory should have been simple, but for a variety of reasons – successions of freelancers, a lack of top-down supervision – have turned into spaghetti-junctions of technical debt.

The thing I want to get out of the way is to assure you that we’ve all been there and there’s nothing wrong with not knowing everything. Programming is brilliant fun and the reason you want to do it every day is probably because you get to rise to a challenge, take the lead and deliver innovative solutions.

But here’s the catch: what makes programming fun (being inventive and thinking on your feet) can inadvertently contribute to technical debt on larger, team-led projects.

There exist established best practices, principles and patterns that have proven themselves over the years. It’s your job to research, learn and implement them – and, in the process, sacrifice a little of your individuality in return for maintainability and reliability. There’s a blog post called ‘You’re not paid to write code’ that sums it up rather well.

Programming is very much about clarity, and when you can’t see the wood for the trees, the chances of your codebase staying purposefully lean and mean will be severely diminished. As such, your primary strategy for staying on top of things should be a fastidious focus on the basics.

Throughout the process, make sure you correct mistakes as you go along. Sooner or later other code will end up relying on these errors. Stop the rot as soon as possible. If you make changes, make them consistently. Database columns, backend functions, API calls, JavaScript functions, DocComments, annotations, HTML attributes, CSS class names, and so on – make sure it all cascades down.

There’s a temptation when building a self-contained site to quietly ignore encapsulation, and to litter the code with global references to app or to reach up through components with parent.parent.parent or such like. This quickly builds technical debt.

Where possible, try to think of your app as a series of independent modules, and build on your framework’s best practices to eliminate tight coupling and interdependency. If it helps, try imagining you’re going to reuse parts of the app in other projects, and think how you would structure files, markup and code to facilitate this.

You need to be vigilant for conflating responsibilities and ask yourself constantly: does this belong here? If code feels ‘icky’, it probably is.

On team projects, lack of code reuse and copy/pasted code is a big problem. When you see repeated code, bite the bullet and refactor all instances to a function, module or template. Again, a good folder structure will make it easy for you to work out where to put things.

The key problem with complexity is that it masks and distracts from the original problem you were trying to solve and in turn ends up generating more code and more complexity, either in the same place or in other parts of the application. You end up in a vicious cycle.

If your code is starting to look more like an algebra lesson than a well-maintained API, you need to take a step back. It may be that you need to refactor that particular chunk of code, refactor the class it’s in or reconsider your current approach to the problem you’re trying to solve.

In extreme cases, you may need to look outside yet again. I recently refactored an extremely complicated view setup that I realised was the victim of a badly thought-out routing schema. By redesigning the convoluted routes into something sensible, I was able to ditch hundreds of lines of dense spaghetti-code in various classes, and remove some long-standing router hacks/bugs in the process.

The one thing you should not do after writing some particularly obtuse code is sit back and marvel proudly at how difficult it is to read! The best code is elegant (read: not tricky); if yours isn’t, you have work to do.

This article was originally published in issue 290 of net, the world's best-selling magazine for web designers and developers. Buy issue 290 or subscribe to net.

Want further advice on polishing up your programming skills?

Designers need to grow their skills to stay relevant and effective, but which are worth focusing on? Should designers learn to code, and, if so, can limited code knowledge really make a difference working with talented engineers? How can designers fit into Agile workflows? Does project methodology even matter anyway? What role does a designer have in creating, using, and maintaining design systems?

In his talk at Generate New York from 25-27 April 2018, SuperFriendly director Dan Mall will share stories and perspectives to answer these questions and more, providing specific methodologies and techniques to help designers become even more indispensable, faster. Get your ticket now.