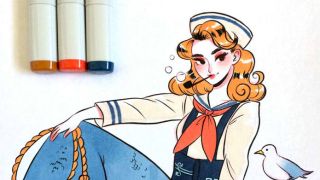 According to the Little Mermaid's famous song, life's better down where it's wetter, under da sea. If these illustrations from MerMay are anything to go by, we're inclined to agree.

Created by character designer and former Disney animator Tom Bancroft, MerMay is a challenge that invites people to post a new mermaid drawing every day in May.

Just like October's hugely popular Inktober challenge, this idea has spread like wildfire across social media and resulted in thousands of mesmerising interpretations of the famous mythical creatures at the #mermay and #mermay2017 hashtags. The challenge might be over now, but if you missed it (or simply want to see some amazing artwork) we've brought together 10 artists who caught our eye with their stunning illustrations. Let's dive in!

Kei Acedera is an Emmy-winning creator who has worked on films such as Tim Burton's Alice In Wonderland. When she's not working on movies, Acedera is an avid traveller who takes her passion for helping the art community around the world.

Her MerMay drawing was created in Beijing as she explored the country with a film crew. The flowing line work really creates the illusion of being underwater, and the coral horns help to give her creation a unique edge. Could we see this creation coming to the big screen in the future?

This is clearly seen in her MerMay illustration, which gives the legendary sea creature a billowing dress based on the shape of a lion's mane jellyfish hood. The distorted body proportions and pigment ink detailing really set this illustration apart from the pack.

A Californian-based designer, illustrator and story artist at Walt Disney Animation Studios, Brian Kesinger has been illustrating mermaids every day throughout the whole month, which has led to some wonderfully imaginative interpretations.

Our favourite, though, is this entry from day 29. "Sealena is the bravest of all MERtadors," Kesinger says on Twitter. "She faces danger with strength, poise and grace." By cleverly using bubbles and the matador cape, this picture also communicates a great sense of movement that all illustrators could learn from.

Cory Loftis is also among the ranks of Walt Disney Animation Studios, where he's a visual development artist. His Twitter feed is packed with creative takes on mermaids, including a Scottish version who uses an octopus as a bagpipe.

This mermaid mime stands out, though, because her shocked expression is spot-on. With make up and hair styled after the famous French actor and mime Marcel Marceau, this MerMay entry from day 10 looks like she has a story to act out. Maybe one day Loftis will find time to tell it.

Vickisigh is another illustrator who has really embraced the MerMay challenge and posted beautiful new work on her Twitter page every single day. We've seen mermaid baristas, mermaid space cadets, and even mermaid cat mums.

Narrowing down a favourite has been hard work, but the mermaid sailor from day 29 just about edges it. With a winning cap and bubble pipe combo, this Copic pen and ink illustration is loaded with a cheeky character that makes us swoon.

Sophira-Lou describes herself on her Twitter page as a YouTuber and 'trash illustrator', but we think she's being a bit harsh on herself. Just take a look at her amazing MerMay art and you'll see there's plenty of talent on display.

This illustration from day 20 sees a songstress of a sea creature belting out a song above a rainbow. By allowing the paper colour to shine through and inform the colour tones, Sophira-Lou has created a distinctive style that's set off by the white line work. Check out her page for even more imaginative mermaids.

Designer and illustrator Amanda Martin has been creating wonderful ink and paint Mermaid pictures throughout May. She's used the challenge to experiment with drawing styles and finishes, but it's these enchantingly washed out colours that really appeal to us.

The faded art style reminds us of salt watercolour paintings, which is appropriate considering the mermaids are playing around in the sea. Topped off with a tidy composition that would work really well as a poster or phone cover, you've got a winning illustration that we'd love to get our hands on.

Erin Humiston is a 2D animator and illustrator who evidently has a keen eye for all things aquatic. His Twitter feed has been an explosion of creative MerMay doodles that have fun with the concept by reworking the types of creature that make up a mermaid's fishy half.

This is clearly seen in his watercolour illustration from day 15, which is called Unsung Sirens 15. Using a lion fish as his inspiration, Humiston used the species' spiky quills to create a prickly punk mermaid complete with a fishhook earring.

Mindy Lee is a Los Angeles-based concept artist for video games and animation, and in her spare time she shares stunning pages from her sketchbooks with her followers on social media.

For MerMay, Lee created a terrifying trio of mermaids that reminds us that the sea creatures may not be as friendly as they seem, according to some tales. With flailing red hair, yellowing fangs and claw-like hands, these mermaids are the scariest ones we've seen from the whole challenge.

PochiePoophead-san is the user name of a freelance illustrator and Twitter user who specialises in Manga-style character design. Drawing with clean ink lines and blocks of vibrant neon colours, PochiePoophead-san's work varies between the charming to the totally NSFW. (So watch out if you're scrolling through their Twitter feed in the office.)

For MerMay, PochiePoophead-san whipped up this cute picture of a mermaid having a bath. How does a mermaid have a bath underwater, we hear you ask? By the looks of it you need an oversized clamshell, a rubber duck, and a starfish-shaped block of soap. Although we think the towels aren't going to get much drying done under the sea...