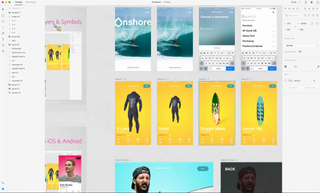 In need of a little web design inspiration? Adobe has made several announcements at its annual Adobe MAX event that it feels will help web and app designers to turn their ideas into reality more quickly and with fewer stumbling blocks.

The core of this is Adobe Experience Design CC, more commonly known as Xd, the prototyping tool that has been in public beta since its launch earlier this year, and the updates are the fruits of feedback from that initial beta phase.

But Dreamweaver CC has also received an update, as have Muse CC and Animate CC. Read on to find out what those updates involve.

Adobe's public beta release of what was once Project Comet and is now Experience Design (Xd) has reached its next stage of development, which brings with it some interesting new features – announced at Adobe MAX 2016. The Mac-only prototyping and UX design tool now includes Layers and Symbols support, plus real-time collaboration.

Anyone familiar with Photoshop and Illustrator will be aware of the power of layers, but Xd's contextual layers look set to power up the app significantly.  In addition, Xd users can now easily share prototypes and get feedback in real time including co-editing of documents, visual versioning and Creative Cloud Libraries enhancements.

Another cool feature in Xd is the collaborative style guides feature, possible thanks to the Creative Cloud Libraries integration and powered by Creative Cloud's collaborative tools. The ability to ensure that all members of a design team have all the design assets available to them on-the-fly, without leaving the application, is a boon.

And good news, Windows-users: according to Andrew Shorten, director of product management for UX design at Adobe, the first beta of Xd for Windows is "extremely close". At Adobe MAX 2016, a Windows version of Xd was demonstrated running on the new Microsoft Surface Studio – exciting!

The update of Dreamweaver CC announced at Adobe MAX 2016 is also the end result of a year of beta testing. The redesign that Dreamweaver has received is designed to make the ageing WYSIWYG editor more of a developer tool, as those seeking simple web design solutions continue to move to online website builders.

Adobe's HTML5 animation tool has received some interesting new features, all designed to help designers create "compelling narratives", says Adobe. For 2017, Animate has been updated with several new tools, including:

Last and very much least (in terms of number of updates, certainly) is Muse CC. Adobe's tool for designing responsive websites without code has been tweaked to improve freeform responsive design by addressing common issues, plus new features including:

Find out more about these updates here.

Adobe is obviously keen to demonstrate that it has not forgotten web designers as it progresses deeper into photography, vector, 3D and motion graphics. But is it enough, and is it heading in the right direction? Give us your thoughts in the comments and on social media.