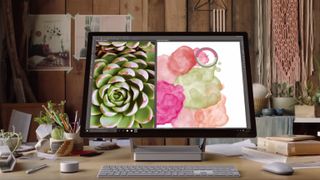 Yesterday Microsoft set the bar high for all-in-one PCs as they released the Surface Studio. With an elegant design that can smoothly switch from a standard desktop to a digital canvas, as well as introducing new tools that look set to shake up how artists and designers work, the Microsoft Surface Studio is poised to be a worthy Windows rival to the iMac.

Complete with a 10-bit colour display, 4K resolution and a strikingly large (yet incredibly thin) 28" display, the Surface Studio's screen is perfect for bringing ideas to life. One of the main appeals is the zero gravity hinge, which easily allows users to transition from a standard desktop PC orientation to a massive drawing surface that sits at a 20-degree angle.

On top of being meticulously crafted, the Microsoft Surface Studio can interact with new tools, notably the Surface Dial. This interesting accessory is a radial control module that works by being placed directly onto the screen. Once there, it opens up specific controls in certain Windows apps and allows users to access commands that would be more difficult and cumbersome to reach normally. It's amazing to watch in action (see the video above) and it looks far too futuristic for its own good.

The only drawback is the price tag, with the Microsoft Surface Studio set to cost creatives an eye-watering $2,999. Even then, only pre orders come with the Surface Dial. If you hang around, they will cost you an extra $99. But seeing as it offers so much, we're certain that artists, designers and creative directors will be willing to take the hit.