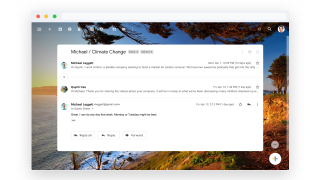 Depending on who you ask, Gmail is either an efficient messaging service that's always getting updated with nifty new features, or a cluttered mess of a design that makes it hard to get on with your work. If you're in the latter camp, you might want to add Simplify to your Chrome extensions.

Created by Gmail's former lead designer, Michael Leggett, Simplify is an extension that clears away the debris and poor UI design choices that have crept into the service over the last few years. Wave goodbye to the big Gmail logo in the top left corner. Say sayonara to distracting sidebars. Instead, get ready to use a stripped back and more functional version of Gmail.

And if anyone knows how to fix Gmail, it's Leggett. For over a decade he's been tinkering with the service, even going so far as to co-found the launch of Inbox, a now discontinued reimagining of Gmail. And although he left Google in 2012, he can't seem to leave the app alone.

Created by Leggett in his spare time, along with the help of some friends, Simplify was developed to turn down the app's visual noise. And although Google launched some new features for Gmail on its 15th birthday, it was too little too late for Leggett, who released Simplify shortly after.

The result is a much more straightforward version of Gmail that still contains core functions, but chooses to tuck them away into more user-friendly places. This allows you to get on with sending messages and reading mail faster without getting bogged down by distracting and clunky functions.

What's more, Simplify is safe. Given that it's mostly CSS with a dash of Javascript, there are no trackers. On top of this your data isn't sent or shared, and Leggett insists that it will never run ads. For total peace of mind, you can even inspect the code for yourself over at Github.