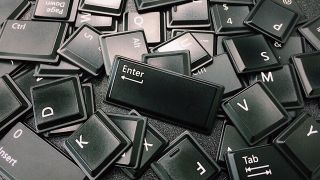 If you haven't updated your Creative Cloud account yet, you may want to think twice – if you're set in your ways when it comes to keyboard commands and Photoshop shortcuts that is. That's because popular commands, such as holding Shift to scale images proportionately in Photoshop CC, no longer work in the same way. So much for your creative muscle memory.

For creatives that haven't been keeping their finger on the pulse of all the latest Adobe developments, the updates have come as an unwelcome surprise. Having got so used to pressing Shift when scaling images that it became second nature, the change has been slammed as unnecessary chaos that's set to disrupt the workflow of artists and designers.

Despite all the frustration the update has caused designers, it appears that a lot of people are unaware of the change. With this in mind, Alex Center, former design director at Coca-Cola resorted to the nuclear option of user irritation: taking to Twitter and posting a complaint in Caps Lock.

NOT ENOUGH PEOPLE ARE TALKING ABOUT THE FACT THAT HOLDING DOWN SHIFT DOES NOT SCALE THINGS PROPORTIONATELY IN PHOTOSHOP ANYMORE.December 10, 2018

It appears that Center wasn't alone, both in his annoyance and his bemusement that nobody seemed to be talking about the update. Dozens of creatives piled in with complaints about the new approach, which turns the Shift command on its head. Now Photoshop scales proportionately by default, and when you hold down Shift this is deactivated.

As if this wasn't counter-intuitive enough for designers used to Photoshop's old ways, the command isn't even consistent across other Adobe platforms. For example, as one Twitter user pointed out, if you want to paste a shape layer into Photoshop from Illustrator, the old Shift command still applies.

The misery doesn't end there though. As well as sympathising with Center's Tweet, plenty of other designers were keen to point out other changes, such as Adobe's decision to replace the Undo command.

Yeah, but what about getting rid of the CMD+Shift+Z, and going to only CMD+Z? #MindBlownDecember 10, 2018

News of this irritation might come as a surprise to Adobe. It was only a couple of months ago that the updates were announced at Adobe MAX 2018 as the 'tools creatives have been waiting for'. And when they were unveiled as part of a demonstration by Adobe's Principal Worldwide Design and Photography Evangelist, Terry White, the new systems were greeted by rapturous applause.

So why the anger now? Perhaps it's a case of something that sounds useful in theory proving to be pesky in practice. Perhaps people are just resistant to any change, but will grow to love this feature. Or maybe, this really is an update some users been craving.

Either way, if you absolutely have to scale proportionally with the Shift key, there is a way around the update...

I literally uninstalled it and went back to use 2018. I understand that the change was for accessibility purposes, but there should be an easy way to change it back under preferences. There are not enough cool features for me to use 2019.December 11, 2018

Will Adobe give in and reverse or modify its updates? Watch this space...