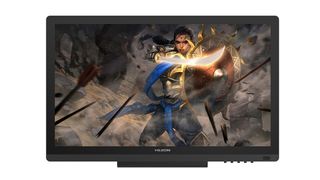 You might've thought you had to hold out for a Black Friday deal to snap up a bargain, but right now you can get an 11-inch or 19.6-inch Huion tablet for a knockdown price. Huion tablets have consistently made it to our list of the best drawing tablets.

The Huion GT-191 has a 19.5-inch screen with a HD 1,920 x 1,080 resolution IPS screen for colour accuracy (displaying over 16.7 million colours) and consistent images. It comes with a free pen, the PE330, which has 8,192 levels of pressure sensitivity and a whopping 350 hours of battery life – after just one and a half hours of charge. There's also an adjustable stand, and the compatibility with Windows, Mac and other major programmes you'd expect.

If you don't need such a big tablet, the 11-inch Huion Inspiroy Q11K is an absolute bargain. It costs under £70, comes with a rechargeable Pf150 pen, which has 8192 levels of pen pressure sensitivity. The tablet has eight customisable shortcut keys and wireless connectivity. It's also one of our top Huion tablet picks.

If you're not in the UK, or want to check out other deals on Huion tablets, see today's best prices on a range of models below: