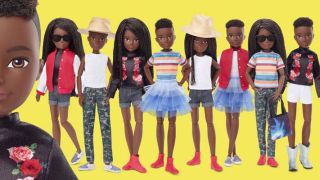 Mattel, the manufacturer behind Barbie, has released a new range of gender neutral dolls that are designed to help children express themselves while they play. Released earlier this week, the Creatable World range sees binary identifiers ditched in favour of dolls that are more open to interpretation.

Considering that Barbie herself has become a target of ridicule due to her unrealistic proportions (you certainly wouldn't want to use her as an artist's model for realistic figure drawing), this is a progressive step forwards for Mattel.

To help break down barriers, the Creatable World toys come with stylishly vague bodies and faces. They also come supplied with diverse clothing, hairstyle and accessory options, allowing kids to deck out their dolls with either dresses, skirts, trousers, or a combination of the lot.

Mattel is the latest in a line of brands tapping into progressive social issues. And while we've looked at 3 times big brands that tried to be woke and failed miserably, the Creatable World toys appear to have been handled carefully.

According to The Independent, Mattel has worked with a "dedicated team of experts, parents, physicians and most importantly, kids" to perfect the look of the dolls, which come in a variety of skin tones.

The product launch includes a video that promotes the doll's personalisation potential, rather than being heavy-handed with an inclusivity agenda. Complete with the hashtag #AllWelcome, the Creatable World dolls look like they're ready to take on a modern market.

Creatable World dolls are available now for an RRP of £34.99.