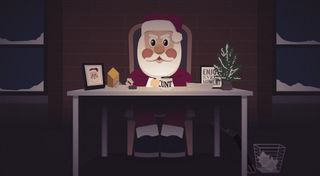 In the spirit of festive giving, a campaign has launched that offers fledgling creatives the chance to have their design portfolio roasted like a Christmas turkey by a leading industry pro.

Merry Critmas invites designers (depending on their experience) to either submit their book for critique, or offer their expertise to review a budding creative's work – and it has already attracted some massive names.

Among the picky elves already signed up are head creatives from agencies including BBH, Ogilvy & Mather, AKQA, Adweek and BBDO, as well as former D&AD president Bruce Duckworth himself. There's also an intriguing option to send your portfolio directly to Father Critmas (identity unconfirmed), which is apparently only for the 'extremely brave'.

While you'll have spotted there are a lot of big advertising names in the pot, Critmas is open to undiscovered talent of all kinds – film-makers, designers, illustrators and more. You can sign up as a solo designer or as part of a team. You can't choose who you get paired up with, but the Critmas team is aiming to get everyone matched up. So barring a festive fiasco, if you submit your book, you'll have it critiqued.

This campaign is in its second year (see what happened last year in this video), and it's the brainchild of Trunk, a global content agency based in Manchester. The team has thrown itself into the campaign with impressive enthusiasm, putting together (and we suspect, starring in) a chilling, It-referencing trailer video that asks fledgling designers: What are you afraid of?

"We were amazed by the amount of sign-ups we had last year and the opportunities it helped to create for junior creatives," says Nick Entwistle, creative director of Trunk and founder of One Minute Briefs. "Due to public demand, we brought back Father Critmas in a bigger, badder and better way.

"In his own kind way, he brutally murders creatives' portfolios to help better them for their future careers and he has got creative directors from the best agencies around the globe to help him (although they probably aren’t quite so harsh)."

If you need a few moments to muster up the courage to submit your work, you can also have a go at 'Critmas Tosser' – a short game of throwing designers' work into floating rubbish bins. Take a moment to appreciate the offensive in-game office decor and hang your head in shame at the abusive comments on your performance ('7: Awful. Absolutely awful.').

Over 100 senior and junior creatives are signed up already. If you're a designer keen to avoid serving up a turkey to your next client, or an established creative looking to give the gift of savage feedback this Christmas, get involved now.