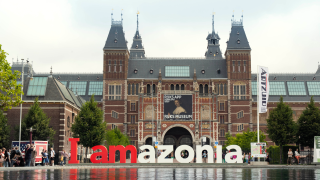 The giant red and white letters of the 'I amsterdam' sign were a popular tourist destination in the Dutch capital, but they were controversially removed by disgruntled city officials in December 2018. However, the sign recently returned with a new message to help save something else that's vanishing, the Amazon rainforest.

If you visited Amsterdam before the removal of I amsterdam, you probably snapped a photo with the distinctive letters that were installed in front of the Rijksmuseum. The sign had become such a go-to selfie spot that selfie numbers probably rivalled those outside some of the world's famous buildings.

It's no surprise then that once I amsterdan was removed, people couldn't help but feel that something was missing. And it's this sense of loss that the new sign, 'I amazonia' taps into.

Created by Belgium advertising agency Duval Guillaume for environmental non-profit Greenpeace, 'I amazonia' raises awareness about the deforestation that's devastating the Amazon rainforest. See the full extent of the situation, which Greenpeace describes as the "rampant exploitation by industrial agriculture" in the video below.

In a blog post, Greenpeace explains why the sign was the perfect means to shine a light on the situation, beyond just tapping into people's affection for the old letters.

"With the inclusive 'I am', the message is also one of profound appreciation and respect for the Indigenous People and traditional communities who have not only been guardians of the Amazon for centuries, but depend on the forest for survival," it says.

"If the millions of people who took selfies with the 'Iamsterdam' sign would also take a stand for the most important landmark in Brazil and the lungs of the planet, and show their solidarity and support with the people and the forest in the Amazon, we could all make giant steps towards protecting one of our planet’s last climate solutions," the non-profit adds.

Want to do your bit to help? There's a petition you can sign here, which will tell the Brazilian government to save the Amazon Rainforest and protect the lands of Indigenous and traditional communities.