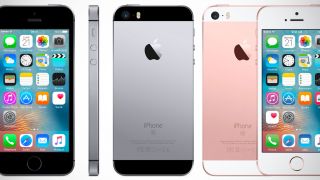 It's hard to go too long without a new helping of iPhone gossip. With the dust settling after the iPhone 11 launch it's finally time for some fresh whispers about an upcoming launch in early 2020; something to bear in mind if you're thinking about grabbing a new iPhone when the Apple Black Friday deals roll around.

Apple Insider is reporting that according to analyst Ming Chi Kuo, the next iPhone to come out of Apple is going to be the much-rumoured iPhone SE 2 – a smaller, less ludicrously powerful model at an affordable price. And honestly, we're feeling pretty disappointed.

It's hard to fault the projected specs. Kuo believes that the iPhone SE 2 is going to pack the same A13 Bionic chip that you'll find in the iPhone 11, with 3GB RAM and a choice of 64GB or 128GB of storage.

Like the iPhone 11 it's said to feature Haptic Touch rather than 3D Touch – a distinction that'll probably be lost on many users, we reckon. And the iPhone SE 2 is expected to come in three colour options: Space Grey, Silver and Red.

The detail that's going to catch most people's attention, though, is the projected price: $399, which we assume would be for the 64GB model. That seems like a pretty sweet deal to us. Who knows, maybe it will make it in to our list of the best camera phones soon.

However, it's also reported that the iPhone SE 2 is likely to be the same size as the iPhone 8, and that's where the disappointment kicks in for us. Because what got us excited about the possibility of an iPhone SE 2 was the idea that Apple might produce a lovely small iPhone to stand out from all its dirty great phone slabs.

The original iPhone SE was a fantastic size; roughly the same form factor as the iPhone 5, which for our money was the best-looking iPhone ever. It was the perfect size for anyone to comfortably use single-handed, and it was absolutely guaranteed to fit into even the daintiest pocket without falling out 30 seconds later. That's not something you can say about the iPhone 8 that the SE 2 is supposed to be modelled on. We speak from experience.

We get that big phones are the thing these days, and we suspect that part of the size deal is so that manufacturers can fit in all the fancy tech that consumers apparently demand, as well as enough battery to run it all. But we'd be a lot more excited about an iPhone SE 2 that compromised on power and features enough to fit into a much smaller case.

Of course, that might be just us. We can't help but feel that Apple's missing a serious trick here, though; doesn't anyone else fancy a smaller phone?

Can't wait for the new iPhone SE to arrive? Here are the best iPhone models, at the very best prices.