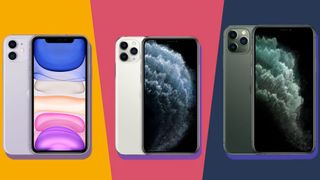 At last night's big launch event, Apple announced three new iPhones: the iPhone 11, iPhone 11 Pro and iPhone 11 Pro Max. There's plenty to explore here, from a slick new design to some impressive specs, to a camera that's probably going to bump it straight to the top of our list of the best camera phones. There are also, predictably, some glaring omissions, and a fair few mean memes already flying around. Let's take a look at the four features we were most impressed by, followed by three we were not.

4 things we love about the iPhone 11

All the chat leading up the event was about the camera(s), and Apple hasn't disappointed on this front. Both the iPhone 11 Pro and iPhone 11 Pro Max have a whopping three 12MP lenses – standard, ultra-wide, and a telephoto one with 2x optical zoom. Even the more basic iPhone 11 has two.

There are more goodies here as well. All three phones have night mode, 4K video recording at up to 60fps. The front camera is also 12MP, and powers Apple's Face ID recognition system (which has been improved for this launch, too).

Another exciting addition is fast charging. All three models will apparently be able to charge up to 50 per cent in just 30 minutes using a dedicated 18W charger. This is included with both Pro models and sold separately for the standard iPhone 11.

We're designers here, so let's ignore the specs for a moment and be superficial. We think the new iPhones look goooood. Two years ago, with the iPhone X, we had the choice between black and grey. Now, we have a whole rainbow of handsets to pick from.

For the Pro Max, as well the familiar Space Grey, Silver and Gold, we have a classy Midnight Green (we're fans). The iPhone 11 is a little more colourful: there are yellow, green and purple handsets to choose from, as well as Product(Red), which is linked to the charitable organisation fighting against AIDS and HIV.

The colours are a little paler and duller than previous models, and that's because the backs of the iPhone 11s are glass to aid wireless charging. In fact, they have a matte look that we quite like. As predicted, the Apple logo has been centralised and the text removed, in contrast with previous iPhone designs.

Apple has form when it comes to reeling us in with impressive specs and snazzy designs, before smacking us round the face with an exorbitant price tag. Who can forget the casual addition of the $999 stand required to go with the Mac Pro (starting price: $4,999)?

For once, we have some prices that don't make us want to vomit. Colour us pleasantly surprised. Don't get muddled, these iPhones aren't cheap by any standards. But they're not nearly as expensive as they might have been. The iPhone 11 starts at $699 (£729), which is little cheaper than the iPhone XR was at launch.

3 things we do not love about the iPhone 11

We actually don't hate the camera design, but it's certainly getting its fair share of criticism on social media. People are comparing it to everything from a fidget spinner to a gas hob to a Philips razor. But let's face it, the old Mac Pro got likened to a bin and the new Mac Pro does look quite a lot like a cheese grater... it's almost a tradition now, and it's not likely to do sales any harm.

The camera 'bump' is a little odd looking, but the fact it's the same colour as the rest of the handset means it doesn't stick out too much.

The iPhone Pro 11 Max? What's coming next, the Pro Max Plus? iPhone Pro Pro Max? We like a confident naming system as much as the next design site, but we can't help but think Apple is backing itself into a corner here, and veering dangerously towards a 'The Greatest Hits of All Time... Ever! Vol 2' situation.

Every new product launch brings with it one big thing that's conspicuous in its absence. With the iPhone 11, it's the lack of 5G. While 5G support isn't yet widespread, it is growing, and there's no doubt it's going to be the next big thing in mobile internet connectivity. We're baffled as to why Apple's most cutting edge phones wouldn't include it.