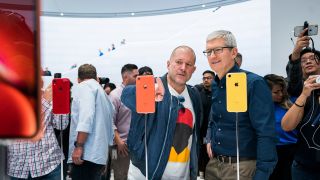 Jony Ive – the man responsible for some of the tech world’s most iconic designs is leaving Apple to start his own design firm, LoveFrom, with Apple as a major client.

So, what will this mean for the world’s largest tech company? Will its designs take a radical turn for the worse, or go on to reach new heights? Will its logo go back to its rainbow roots, as rumoured recently? Will the company ditch its 'i' now that it's got rid of iTunes? And you will you ever be able to get a decent Apple Pencil deal?

We examine five of the most likely possibilities.

Without Ive’s insanely strong obsession for thinness and lightness, Apple could become freer to explore new designs. Decisions like the one to make the MacBook Pro’s keyboard as thin as possible (at the ultimate expense of reliability) could be avoided. The balance of function vs form therefore may tilt a little more towards function.

After Ive’s departure, he’ll be replaced by Evans Hankey (Apple’s industrial design chief) and Alan Dye (the company’s user interface head), who will report to operations lead Jeff Williams. That could mean less workload placed on one person’s shoulders, more opinions being given on design, and perhaps less of a one-track-minded approach. Without Steve Jobs, Ive had no-one on his level or above to temper his decisions. Now with Hankey and Dye working together, that process could be restored.

Jony Ive was a hardware guy. Think about the videos he narrated: almost all of them were about the hardware aspects of the product. Now with two people in charge of design, one from hardware and one from software, there should be more passion for software design being added to the mix, ultimately improving the balance of Apple’s designs.

Without Ive’s insanely strong design talent, Apple could be left without inspiration. With its talismanic design chief departed, Apple’s position may slip as rivals catch up with stunning designs of their own.

These days, Apple isn’t alone when it comes to amazing design in the tech world. The competition has seen how valuable inspiring, aspirational design can be, and companies like Huawei are coming out with some superb devices. Let’s, err, not talk about Samsung’s Galaxy Fold, though.

But while its rivals are working hard, we wouldn’t bet the farm on Apple losing its design mojo. Jony Ive never worked alone, instead collaborating with a carefully curated team that was put together over many years. They all share similar design sensibilities and understand each other extremely well. Ive’s departure is not being followed by a mass exodus of these designers; the core of Apple’s design lab is staying put, even if its chief designer is on the way out. While we may see fewer flashes of Ive brilliance, that doesn’t mean the whole design philosophy is going down the pan.

03. A new design maestro emerges from inside Apple

As we mentioned before, Apple’s design team is an incredibly talented bunch of people that works together closely every day. You don’t get hired by Apple unless you’re something special, and that’s especially true for its elite, exclusive design team.

With so much talent on hand, it’s entirely possible that the next Jony Ive emerges from within Apple’s ranks and is already at the company right now. With Ive taking the spotlight, few people even know the names of his fellow design team members – could this be the time for one of them to step into the limelight?

Ive took a break from managing Apple product design from 2015 to 2017 in order to oversee the design and creation of Apple Park; he stepped back to more of an oversight role with Apple’s devices, leaving his team in charge of day-to-day product design. That he was able to do this attests to the trust he placed in the abilities of his team, so we wouldn’t be surprised if one of them (or two, in the form of Hankey and Dye) steps into his shoes.

Alternatively, Apple may instead decide to hire a replacement externally. There’s plenty of talent out there, and a lot of people who share Ive’s keen sense for design. Apple has deep pockets and could afford to pry away any designer they wanted.

While this is possible, we don’t consider it too likely. Apple has hired famous names in the past, such as when it brought in Angela Ahrendts from Burberry, but in these cases it’s done so because it didn’t have anyone in the company ready to step up. With its legendary design studio, it most definitely does in this instance.

Still, it’s not outside the realm of possibility. Neither Jony Ive nor Tim Cook will be short of contacts who they can consult for the biggest and brightest talent to bring to the company, so don’t be too shocked if an outside design luminary heads to Cupertino in Jony Ive’s stead.

Apple will be one of Ive’s major clients, and the naming of his new company (LoveFrom, which was inspired by a Steve Jobs quote) suggests the link between the two will be strong. Few people (if any) understand Apple like he does today, and that’s a valuable asset the company won’t want to part with completely.

As well as that, many of Ive’s projects are years from being released. Apple likes to spend a long time perfecting a product before it ever sees the light of day – just look at the iPhone X. With his influence continuing to course through the company, it could be years until we notice any significant shift in Apple’s designs.

However, we’re a little sceptical of this angle. Although Apple has said it will remain a “major” client of Jony Ive, things won’t just continue as they are because Ive simply won’t have time. He’ll be taking on other clients for major projects of their own and will be up to his eyeballs in work.

While he may work with Apple on a few big projects here and there (Apple’s rumoured smart glasses or self-driving car, for example), he won’t be active at Apple on day-to-day design issues. Whether that means Apple’s design will improve or slide downhill isn’t yet clear, but we’re sure things won’t just carry on as normal.