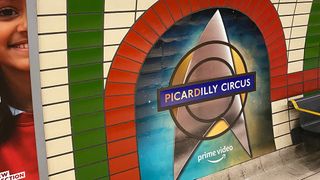 Commuters in London today may have noticed a major tube station looking a little different – Piccadilly station has been transformed into a Star Trek haven, complete with pun-tastic new name that we fully approve of.

The enterprising new look is dedicated to Starfleet icon and franchise mainstay captain Jean-Luc Picard. The whole station has been given a makeover, from the Piccadilly roundels that have been replaced by Startfleet emblems, to the signage, which now reads 'Picardilly Station'. (For more ways to make a splash on a large scale, see our roundup of the best billboard advertising campaigns.)

The station takeover has been masterminded by Amazon Prime, in collaboration with Transport for London and Links Signs. It's all in order to create a buzz around the upcoming series Star Trek: Picard, which will be available on the popular streaming platform from 23 January. As you'd expect, it's only temporary – Trekkies who want to check out the intergalactic makeover will need to get there today or tomorrow (15 and 16 January).

"The promotional overhaul allows Amazon to reach audiences to inform them about the release date in a creative way, celebrating a fictional character whose legacy will go down in history," says Paul Cox of Links Signs. "In the words of Captain Picard, we think it's really set to ‘engage’ the public!"

The new series was unveiled at the recent New York Comic Con. It will focus on Captain Picard's later years, and see Sir Patrick Stewart returning to the iconic role. Check out the trailer above for a taste of what to expect.