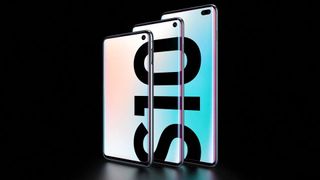 A couple of weeks ago, Samsung unveiled its much anticipated new Samsung Galaxy S10 to a packed crowd at its 'Galaxy Unpacked' media event. As expected, the company unveiled three shiny new models to an appreciative crowd – the standard S10, smaller S10e and larger S10+ – and you'll find the best deals on all of them right here.

Directly below you'll find our handy price comparison tool, which will let you filter and sort through all the best Samsung S10 deals from all the major networks in the UK. Further down you'll find the best SIM-free deals too.

If you've already decided the new S10 is going to be the best camera phone for you in 2019, here's how much the new SIM-free S10 handsets will set you back, plus the best SIM-free deals available right now:

Samsung S10 or S10 Plus, free Galaxy buds, up to £300 off with valid trade-in: from £499
Save up to £300 - Samsung is offering some really great trade-in deals on the Galaxy S10 when you order before midnight on 31 March 2019 directly with Samsung Online. Save up to £300 by trading in your old phone!View Deal

As expected, tonight Samsung unveiled not one but three shiny new Galaxy S10 models; the standard S10, S10e and S10+. All three will come complete with an Infinity-O display, Samsung’s no-bezel, all-screen design, making it perfect for seeing art and design work in all its glory.

When it comes to the best smartphones for creatives, there are many considerations, but undoubtedly two of the most important are performance and camera capabilities. And the new S10 looks to have both in abundance. But we can't go any further without first mentioning the Galaxy S10's Infinity Display, Samsung's no-bezel, all-screen design, which is a huge selling point. The 6.1-inch almost edge-to-edge screen makes it perfect for viewing artwork and photography in all their glory.

Depending on which model you opt for, the S10 builds on its older siblings impressive camera, with users now able to capture stunning shots any time of day or night with a triple aperture lens on the back – 12MP regular lens, 12MP optically zoomed telephoto lens, and a brand new 16MP ultra-wide lens. On the front you'll find a single 10MP camera with dual auto-focuses. And to that the IP68 water resistance and even the rain means you'll never miss a moment.

In terms of performance, the Galaxy S10 is powered by new top-of-the-line Snapdragon or Exynos chipsets, depending on what country you're in, so speed is very much of the essence. It also boasts 8GB of RAM and includes options for 128GB or 512GB of internal storage. And the 3,400mAh battery means all-day battery life is a cinch.

It's worth noting that the release of the S10 will almost certainly mean there will soon be some brilliant deals to be had on its older but still super sibling, the Samsung Galaxy S9. If you don't mind not having the very latest device, the S9 is still an excellent buy – and it's just about to become a whole lot more affordable. Here are the best Samsung Galaxy S9 deals available right now...