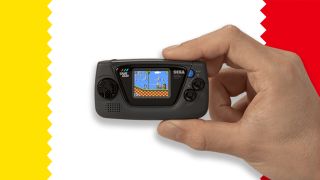 As gamers eagerly await the reveal of the next generation consoles such as Sony's PS5, Sega has snuck in a hardware reveal of its own – but rather than excited, the design of the Game Gear Micro has left us utterly baffled.

Announced to coincide with the company's 60th anniversary, the Game Gear Micro is a miniature revival of Sega's 1990 handheld, the Game Gear. And when we say miniature, we mean really, really miniature. The device measures just 80mm x 40mm, and features a 1.15-inch display – small enough to make your iPhone feel gargantuan (check out the best iPhone apps to make use of all those pixels).

While mini versions of retro consoles have been a huge hit over the last few years, Sega may have taken things a little too far with the Game Gear Micro. We can't imagine this minuscule device offering a comfortable gaming experience – particularly if any of the in-built games involve reading text.

Speaking of in-built games, that's the second bewildering aspect of the new machine. Sega is releasing the Game Gear Micro in not one, but four colours (black, blue, red and yellow), and each edition contains a different four games. The black version for example features Sonic the Hedgehog and OutRun, while if you want to play fantasy classic Shining Force, you'll need the yellow version. To play all sixteen games, you'll need to buy four different Game Gear Micros, at 4,980 yen (around $46) each. Makes sense.

Needless to say, Twitter was quick to respond to Sega's announcement. And the main topic of conversation was, of course, the size:

My Sega Game Gear Micro has arrived! It's actually bigger than I expected. pic.twitter.com/hjiXcKJUWxJune 3, 2020

Me getting ready to play my new game gear micro pic.twitter.com/ZPgw6C5jxSJune 3, 2020

Still, there's nothing wrong with a bit of nostalgia, and the Game Gear Micro could prove to be a hit. In Japan, at least – a US or UK release date is yet to be announced. But don't worry, if you feel like taking a walk down memory lane right now, take a look at some of the best retro gaming consoles currently available.