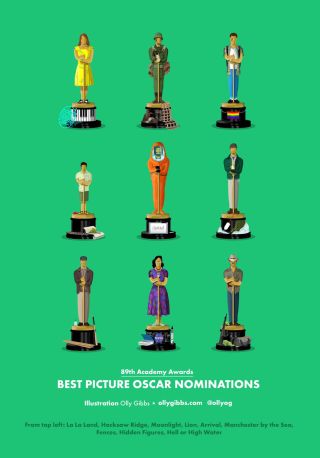 For the fourth year in a row, illustrator Olly Gibbs has turned best picture Oscar nominations into a series of beautifully designed illustrations. Just as before, each Oscar hopeful is decked out in the gear they wore in their respective films and standing in the same position of the iconic golden statue, as well as standing in a formation that would make for a brilliant poster design.

Revealed on Olly's Twitter page, the illustrations have become a staple in the run up to Oscar night. Nominations for the 89th Academy Awards were announced on January 24th, meaning Olly has to work quickly to get this images ready before the award night on February 26.

The full list of illustrations includes a wide range of films, including: La La Land, Hacksaw Ridge, Moonlight, Lion, Arrival, Manchester By The Sea, Fences, Hidden Figures, and Hell Or High Water. Scroll through the gallery below to get a closer look at each actor.